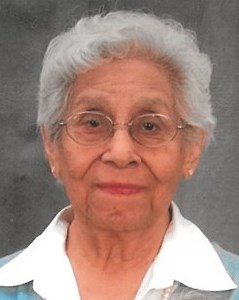 Esther P. Razo, 95, of Peoria, Illinois, peacefully passed away on Tuesday, January 11, 2022, at home surrounded by her loving family. Esther was born on March 19, 1926, in Chillicothe, IL, the daughter of Isaac and Altagracia (Lujan) Delgado. She married John E. Razo on October 22, 1949, in Peoria, IL. John died October 29, 2020, one week after celebrating their 71st wedding anniversary. She is survived by her five children: Rebecca Layman of Peoria, Steven (Ann) Razo of Cheyenne, WY, Thomas Razo of Vancouver, WA, Cynthia Razo of Peoria and Jeanette Anguita of Mascoutah, IL. She is also survived by 10 grandchildren: Jeremy (Amber), Jamie, Jesse and Joseph Layman; Thomas Jr., Wesley and Rosemary Razo; Nicole (Curt) Curtis; and Paul (Janina) and Christopher Anguita, as well as seven great-grandchildren: Austin and McKenzie Layman; Mia Razo; Cole and Dylan Curtis; Anabela and Aleksander Anguita, and many nieces and nephews. She was preceded in death by her parents; four sisters: Evelyn Martinez, Mildred Delgado, Mary Lizaola and Lucille Tarr; and four brothers: Samuel, Marvin, Joseph and Moses Delgado. Esther was a proud 1946 graduate of the Academy of Our Lady. She would say she was a city girl and Peoria was her city. She was an avid supporter of events such as parades, concerts, festivals and craft shows. If it was happening in Peoria, she was there. At the age of 35, she learned how to drive, even though riding the bus before that with her five children hadn’t slowed her down a bit. She was a deeply loving, devoted and supportive mother. On a dare from John, she applied at World Drug Stores as a salesclerk at the age of 40 and worked there for 14 years until retiring in September 1980. By then she was a grandmother, a role she relished. She was like a second mom, attending all of their school activities, chauffeuring them around to practices and keeping them entertained during summer break. Her great-grandchildren brought her a lot of joy and happiness as well. She also enjoyed going to Humana Activity Center to socialize with friends and play games. Esther didn’t know a stranger and was loved by all who knew her. The family would like to especially thank those who helped care for Esther over the past year: Tom, Deacon John, Julia, Heather of OSF Hospice First; Kathy, an OSF Hospice volunteer; Tiffany of Help at Home; and Dr. Arun and Tracy Talkad, who went above and beyond with their love and support for Esther as well as John, helping make a difficult time easier for the family. Cremation rights have been accorded. No visitation or services will be held, and burial of ashes will be held at a later date. In lieu of flowers, memorials may be made to the Alzheimer’s Association Peoria Chapter.
VOIR PLUS VOIR MOINS