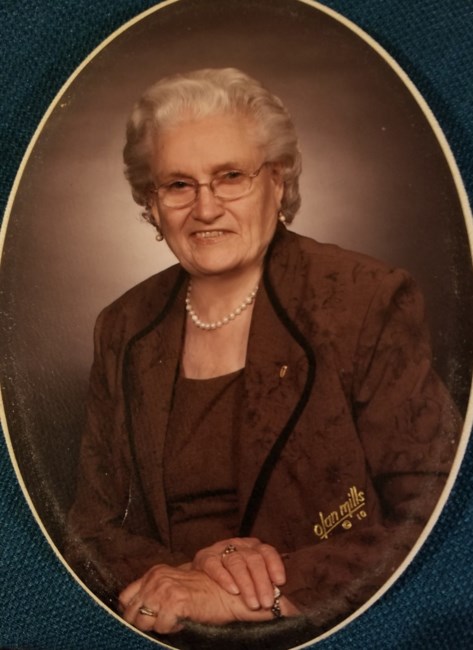 Elizabeth F. “Lib” Bowers, 92, a resident of Brookdale Assisted Living in Central, SC, entered into eternal rest on June 14, 2021. She was born in Piedmont, SC on September 1, 1928, to Esley and Nettie Freeman. She was the widow of Bill G. Bowers, Sr. Lib was mother to six sons, Gaines Bowers Jr. (Mary Ann) of Lincolnton, NC, Michael Bowers (Ella Mae) of Wellford, SC, Ed Bowers of Seneca, John Bowers (Phyllis) of Easley, Phillip Bowers (Marsha), of Six Mile, and George Bowers (Crystal) of Six Mile. She and her beloved husband raised their children with love and devotion in Six Mile, SC. Lib and Bill met while working in a textile mill and they were married on July 3, 1948. Her primary vocation was as a mother and homemaker, and she used her secretarial skills in a number of Pickens County offices, from which she was retired, and at Lawrence Chapel United Methodist Church in Central, SC. She was an excellent cook, a gifted seamstress and enjoyed needlework. Loving her family was her greatest joy. In addition to her sons, she is survived by her brother, Curtis Freeman, her grandchildren, Michael N. Bowers, Charles Bowers, Jonathan Bowers, and Elizabeth B. Brewer, her great grandchildren Payton Bowers, Luke Bowers, Julia Bowers, Annabelle Brewer, Cayden Brewer and William Brewer, and a host of nieces and nephews. She will be fondly remembered by many friends, young and old, far and near. In addition to her husband of 69 years, she was predeceased by her parents, her brothers, James Freeman and W.T. Freeman, her sister Clara F. Rushton, and her grandson, Michael Hill. The family will hold a reception from 12:30 p.m. to 1:45 p.m. at Grace United Methodist Church in Pickens, SC on Wednesday, June 16, 2021, followed by a Service of Death and Resurrection at 2:00 p.m. conducted by The Reverend Mr. David Taylor and The Reverend Mike Bowers. Burial will follow in The Hillcrest Memorial Park, 2410 Gentry Memorial Highway, Pickens, SC 29671. In lieu of flowers, donations may be made to the Bill G. and Elizabeth F. Bowers Endowed Scholarship Fund at Spartanburg Methodist College, 1000 Powell Mill Road, Spartanburg, SC 29301, to Grace United Methodist Church, 309 Cedar Rock Street, Pickens, SC 29671 or to a charity of one’s choice. Dillard Funeral Home is assisting the Bowers family. Online condolences may be sent to www.dillardfunerals.com
VOIR PLUS VOIR MOINS