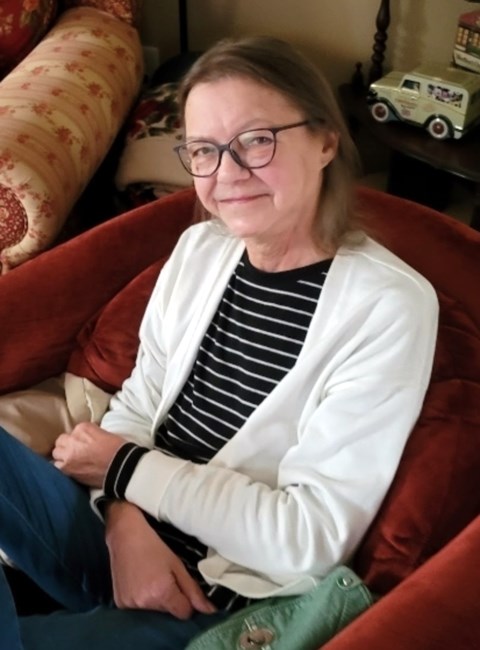 Susan Marjorie Regan, 66, of Potsdam, NY passed away with family by her side on January 20, 2022 at Crouse Hospital in Syracuse where she had been a patient since December 25. Sue was born on October 10, 1955 in Potsdam, NY to Robert G. Nicholson and Caroline (Nelson) Nicholson. She was a 1972 graduate of Potsdam High School and after graduation traveled to Europe. She married Emer Jay Hamblin in Switzerland and their son, Jason Tyler Hamblin, was born in Utah where they lived for several years. Sue and Jason returned to Potsdam when the union ended. Sue tended bar and waitressed for many years at Tardelli’s and other local restaurants, was a bartender at the Elk’s Lodge #2074, and worked for a time at the Laundry Chute in Canton. Sue married George Regan on November 29, 1986 and together they were passionate and active Democrats. She supported him while he served as a Potsdam Village Trustee for 16 years and a highlight of their political involvement was meeting Hillary Rodham Clinton. They started, grew, and eventually sold the Potsdam Taxi, where Sue held the role of primary dispatch. Sue and George both battled numerous health challenges over the years but remained steadfast in their love and support for one another until he passed away with her by his side on November 30, 2011. She loved family and friends and will be remembered for her frequent phrase, “love your guts.” She enjoyed being at camp, visiting with family and friends, playing Pinochle, and watching reruns of Gunsmoke. She is survived by her son, Jason Tyler Hamblin of Brooklyn, NY, two sisters, Ann McGowan of Potsdam and Nancy Nicholson of Ogdensburg, several nieces and nephews, and many cousins and friends. Sue was predeceased by her beloved parents, Robert and Caroline, her parents-in-law, Patrick and Loretta “Petey” Regan, her brother, Peter C. Nicholson and a sister, Janet R. Nicholson. Calling hours will be held on Thursday, January 27 from 4-7pm at Garner Funeral Home in Potsdam. A funeral mass will be held at 10am on Friday, January 28 at St. Mary’s Catholic Church in Potsdam with Father Joseph Giroux as celebrant. Memorial contributions in her name may be made to the Potsdam Humane Society or a charity of your choice.
VOIR PLUS VOIR MOINS