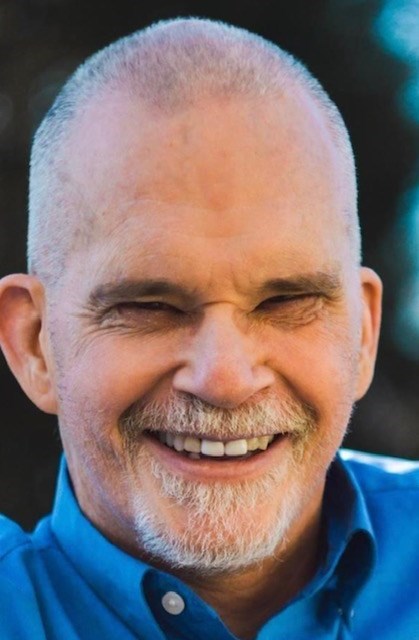 My hope is built on nothing less, Than Jesus' blood and righteousness, I dare not trust the sweetest frame, But wholly lean on Jesus' name. Mitch Lyman, age 65, of Raleigh, North Carolina passed into the loving arms of his Savior on Saturday, September 24, 2022. He was born September 5, 1957 to William "Mack" Lyman and Shirley Smith Lyman in Raleigh, North Carolina and grew up on one of the channel islands adjacent to Wrightsville Beach. Mitch often spoke of the wonderful freedom that he experienced as a child living in this idyllic community-surfing; riding his bike all over the island and to the beach; and attending rock concerts with his brother, Mark, and friends. Ever a daredevil, he recalled taking advantage of the prime surf before and after a hurricane! During the summers, he enjoyed the company of his Smith and Martin cousins during their annual visits, especially Cindy (Martin Finsie) who was very close in age to Mitch and Mark. She remained one of his best pals and big sis throughout his life. These childhood experiences and relationships established the solid foundation of confidence and courage Mitch drew on throughout his life. After high school, he traveled to UNC-Greensboro for, as Mitch put it, the first "leg" of his education. He soon found that college was not for him and decided to join the Navy. Again, with his famous, self-deprecating humor he described his recruiting journey like this: "The Air Force wouldn't even let me sweep the floors, but the Navy decided I was fit to run a nuclear sub, so I joined them." While traveling throughout the Mediterranean in, as Mitch would put it, "a floating K-Mart" (officially referred to as a supply ship), Mitch discovered the first two loves of his life, technology and, at a bible study in Panama, most importantly, his Heavenly Father and his Big Brother, Savior, and Lord, Jesus Christ. In 1988, Mitch decided to return to North Carolina to pursue a degree in electrical engineering. In May 1992, he graduated with honors with a Bachelor of Science in Electrical Engineering from North Carolina A&T and went to work for Nortel in RTP as an information technology analyst. In the fall, he met Wendy, fell in love, and married a year later on October 9, 1993. They built a life centered around raising their three children, serving in church, teaching God's Word, and loving Jesus. Life was very good! Then, in late 2013, Mitch contracted a fast-growing type of tonsillar cancer. The treatment involved the maximum course of chemotherapy and radiation over just five weeks. The treatment was a success, but the after-effects resulted in long term chronic fatigue and eventual deterioration of life-sustaining systems that regulated his swallowing, breathing, heart rate, and blood pressure. Despite a series of disappointing diagnoses, constant pain, insomnia, and crushing fatigue, Mitch's peaceful and upbeat countenance reigned in the Lyman home. His legendary dry humor and explosive laugh would always chase away the blues. As his mobility waned, he continued to encourage, teach, and impact lives through online social media posts and blogging. Especially precious to him was the recent birth of his first grandchild, Ezekiel James Corpus, on August 18, 2022. He looked forward to weekly video chats with Ezekiel and his mom, Jenna. To Mitch, life remained very good, just different. Mitch was well known for his love of Jesus, wicked sense of humor, love of learning and teaching, deep conversations, appreciation of all styles of music, and, most recently, fondness for the visual arts. He is survived by his wife of 29 years, Wendy, and their children, Josh Lyman, Caleb "CJ" Lyman, and Jenna Corpus (Matthew); grandson-Ezekiel James Corpus; and his brother, William "Mark" Lyman (Laurie.) He was preceded in death by his father, William "Mack" Lyman and his mother, Shirley Smith Lyman. We all miss him mightily. Thanks to Jesus, we can look forward to the day we will see him again. Until then, life is still very good, just different. A Celebration of Life will be held on Saturday, October 1, 2022 at 1:00 PM at Fellowship Raleigh Church, 410 Lord Berkley Rd., Raleigh, NC 27610. The family will receive visitors at the church beginning at noon and at a reception in the fellowship hall immediately following the service. In lieu of flowers, contributions in Mitch's memory may be made to Mercy House of the Philippines, 0008 Yakal St. Brgy Cuyambay, Tanay, Rizal 1980, Tanay, Rizal PH, https://www.mercyhouseph.org/. Service arrangements provided by Brown-Wynne Funeral Home, 300 Saint Mary's St., Raleigh, NC. Fond memories and expressions of sympathy may be shared at www.brownwynneraleigh.com for the Lyman family.
VOIR PLUS VOIR MOINS