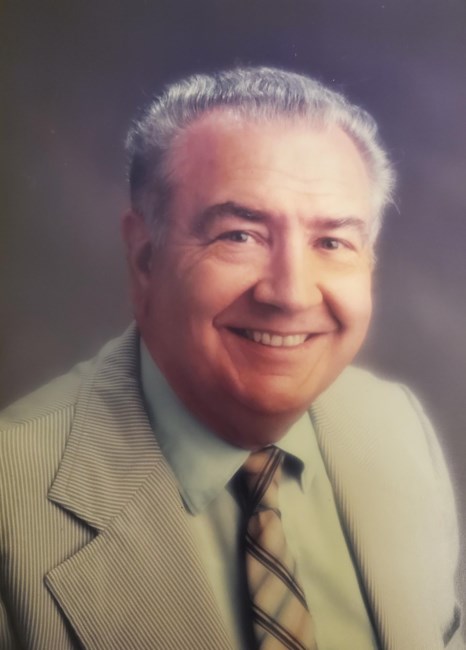 Calvin L. Walker passed away May 8, 2020. A private graveside service will be held at Parkway Memorial Cemetery in Ridgeland, MS on Wednesday, May 13, 2020. Calvin was born September 2, 1924 in Memphis, TN. His parents moved to Jackson, MS when he was nine. He was a graduate of Central High School, Jackson, MS. After graduation, he served in the 15th Air Force, 459th Bomb Group in Italy during World War II. Upon returning home from the war he attended Mississippi College on the G.I. Bill and married Rosa Lea James, a marriage that was to last 73 years. In 1950, Calvin became Executive Director of the Jackson Boys Club - now the Boys and Girls Club. He served in that capacity for 44 years, retiring in 1993. His outstanding career was highlighted by numerous accomplishments and awards. In 1986, the Southwest Boys and Girls Club was named the Calvin L. Walker Unit. In 1990, he was honored as an outstanding volunteer of the Goodwill Industries. He was also the recipient of the National Boys Club Bronze Key Award. These are a few among the many accomplishments, but the one of which he was most proud was the establishment of the John I. Hay Boys Club Camp. The camp served more than 1,200 boys and girls each year. Former club members continued to keep in touch with Calvin. Many testify to the positive influence he and the club had on their lives. Calvin and his wife were avid campers. After his retirement, he and his wife, Rosa Lea traveled and camped across the country. They ventured as far north as Nova Scotia and Alaska. They were members of Oak Forrest Baptist Church, Jackson, MS and Ridgecrest Baptist Church, Madison, MS. Calvin is preceded in death by his father, John R. Walker, a WW I veteran and his mother, Alice Walker. Also by brothers, John Lewis Walker, a WW II bomber pilot and Carl Thomas Walker, a WW II Navy veteran. Calvin is survived by his loving and devoted wife, Rosa Lea James Walker, daughter, Alice Douglas, son, James Leonard Walker, three grandchildren and five great-grandchildren. In lieu of flowers, please consider memorial donations to Ridgecrest Baptist Church, Madison, MS or the Boys and Girls Club Calvin Walker Scholarship Fund. The Boys and Girls Club (BGC) alumni raise money for the scholarship and the president of BGC chooses the deserving students. Memorials for this fund may be made to BGCCM, P.O. Box 3194, Jackson, MS 39206.
VOIR PLUS VOIR MOINS