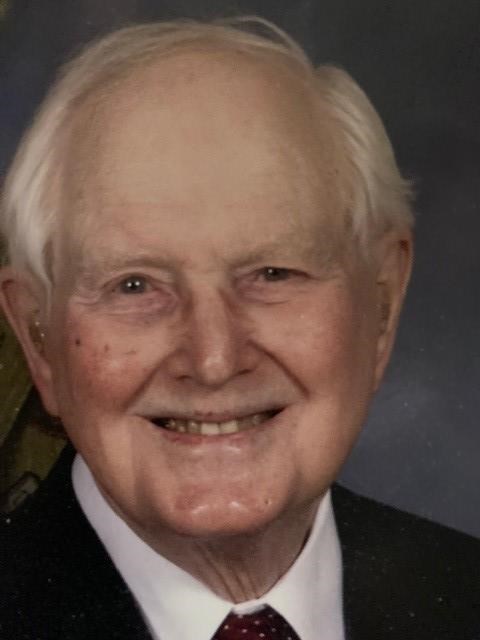 Harold was born on May 24, 1923 to Harold and Helen Mayer in San Antonio, TX. His Dad died in 1927 and Helen married Captain Henry Mayfield in 1935. Harold was raised in San Antonio with many cousins and had a normal childhood. He graduated from Thomas Jefferson High School in 1940, then entered Texas A&M University that fall to major in Petroleum Engineering. ROTC was a requirement at that time and with the World at war in 1943, his class entered the Army as Privates. He entered OCS and was commissioned as a 2nd Lieutenant. He was sent to England/Europe and entered the war just after D-Day as a Forward Observer directing fire against the Germans in Belgium (Bellau Woods) and Germany. Upon the end of the WWII, he was sent back to the US and was able to complete his degree in May 1947. Harold went to work for Gulf Oil Corporation upon graduation and later that year met the love of his life, Marie Carmichael in Beaumont, TX. They were married on June 19th, 1948 in Beaumont, TX at the First Baptist Church. Harold remained in the reserves while working for Gulf in Richmond, TX where son Michael Henry was born and Captain Mayer was sent to the Korean Conflict from 1951-1953, then continued his career with Gulf in Kilgore, TX where daughter Patricia Ann (Pam) was born, then on to Shreveport and Jackson MS in 1958. In 1960, after another transfer was announced, he and Wilbur Lilly formed a consulting partnership company, Lilly and Mayer in Jackson. The partnership dissolved because their 2 main clients hired them in 1970. Harold joined American Quasar and then later Champlin Resources/UPRC as District/Regional Manager before finally retiring in 1990. During retirement, Harold and Marie traveled extensively, visiting every continent. Their last trip was aboard the Queen Mary as it sailed from Dubai to New York City in 2012 enjoying travel companions and the sights along the way. Also during retirement, he served the community from the Northside Lions Club where he was the “parking chairman” for football games and golf tournaments. He was Lion of the Year 10 times and received the Lions Foundation Award. He held several offices in the Society of Petroleum Engineers, the last as Scholarship Chairman in 2010. He and Marie served at Woodland Hills Baptist Church in many Sunday School positions for 60 years. Harold served as a Deacon and Chairman of the Board of Deacons during that time. He was predeceased by wife Marie and is survived by son Mike Mayer and wife Patti of Midland, TX and daughter Pam Stephenson and husband Steve of Gluckstadt, MS. Also survived by grandson Daniel Stephenson and wife Hannah of Nashville, TN and granddaughter Ginny Herr and husband Bob of Madison, MS granddaughter Michelle Hofer and husband Steven of Midland, TX and granddaughter Meghan Cotton and husband Christian also of Midland, TX along with 10 great grandchildren. Harold was watched over carefully by sitters Nikita “Shun” Sweeny, Grace Smith, Janet Walker and led by Mary King for the last few years. The family cannot thank them enough. Services are performed by Brother Ty Piggot in Ridgeland MS at Parkway Funeral Home on Monday November 21, 2022. Visitation will be from 10am to 11am, with funeral service to follow at 11am. Interment will be held in Forest Park Cemetery in Houston, TX.
VOIR PLUS VOIR MOINS