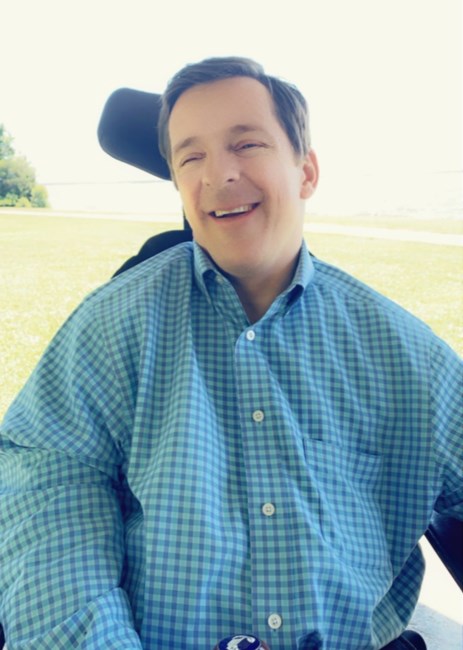 John Patrick Chaplain, 48, passed away Saturday, November 26, 2022 at home. John was born in Jackson, MS to Bonnie-Jean “B.J.” and George “Lucky” Chaplain. He attended St. Richard Catholic School and graduated from Klein High School in Spring, Texas. He attended San Antonio College and graduated from the University of Texas in San Antonio with a degree in Political Science. He then spent a year at Dallas Theological Seminary. John’s faithful led life was full of many adventures. One of his most treasured memories was a mission trip to Brazil. John loved to travel and was fiercely independent. His determination, courage, and love of the Lord was an inspiration to all who knew him. He had a passion for sharing God’s words and spoke to many groups and churches. John never let any challenge stand in his way. He will be terribly missed. John is survived by his parents, BJ and Lucky; brother, Chris and his wife, Laurie Henley Chaplain; nephews, Cooper and Noah Chaplain; and numerous aunt, uncles, and cousins that he loved dearly. John was predeceased by Rosemary and George Chaplain, grandparents and Marian and Richard Romaire, grandparents. A celebration of John’s life will be Friday, December 2 with visitation at 10, with a service to follow at 11 at Highland Colony Baptist Church in Ridgeland, MS with burial to follow at Parkway Funeral Home. Very special thanks to TaQuetta Gibbs for loving care. Memorial donations may be made to St. Richard’s Special Kids, P.O.Box 16547, Jackson, MS 39206.
VOIR PLUS VOIR MOINS