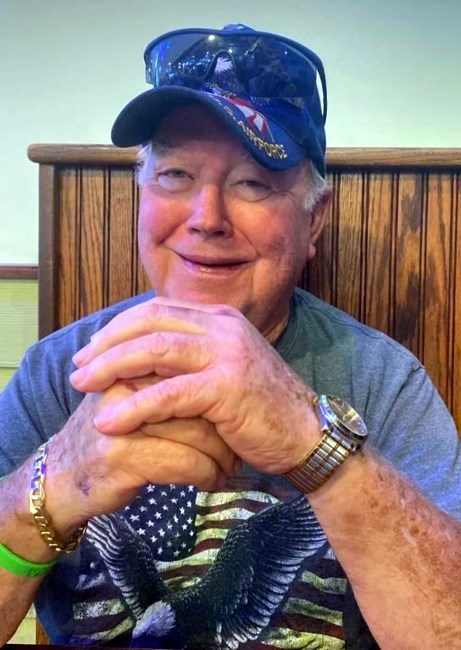 Harold DeWayne Dawson, veteran of the United States Air Force, passed away on September 20, 2022, at the age of 81. Harold was born in Bristow, Oklahoma on February 17th to Olan and Velma Dawson. Harold entered the Air Force in 1959 at age 18. His military service took him all over the world including Japan, Philippines, England, as well as many bases in the United States. He served in the Vietnam War while stationed in Thailand. He won a medal for valor in 1969 for a prominent role in removing a helicopter crew from wreckage with explosive fuel and a bomb in close proximity. Harold served as a medical technician during peacetime and in weaponry munitions during wartime. He retired from the Air Force in 1979 while stationed at Patrick Air Force Base. Harold had three sons from his first marriage, Billy Lee, Tony and Troy. He met Pam, his soulmate and wife of 46 years, while stationed in England. Pam and Harold married in England in 1976 and later that year moved to Florida with Pam’s two children, Darren and Donna. The couple would have one child together, Richelle in 1978. After his military retirement, Harold took a civilian role at Raytheon Technologies as a munition’s handler, and then as an ordnance technician at Cape Canaveral Air Force Base and Kennedy Space Center. As a NASA contractor he delivered ordnance used on the Space Shuttles, and the Atlas, Delta and Titan rockets. He also served as a weapons handler supporting the U.S. Navy Submarines and U.S. Coast Guard at Port Canaveral. Harold was devoted to his country and his family. He proudly wore his U.S. Air Force Veteran cap everywhere. He was loved and admired by family and friends in the United States and England. Harold’s pleasant demeanor and willingness to lend a helpful hand to anyone were staples of his personality. He made a lasting impression and will be missed by many.
VOIR PLUS VOIR MOINS