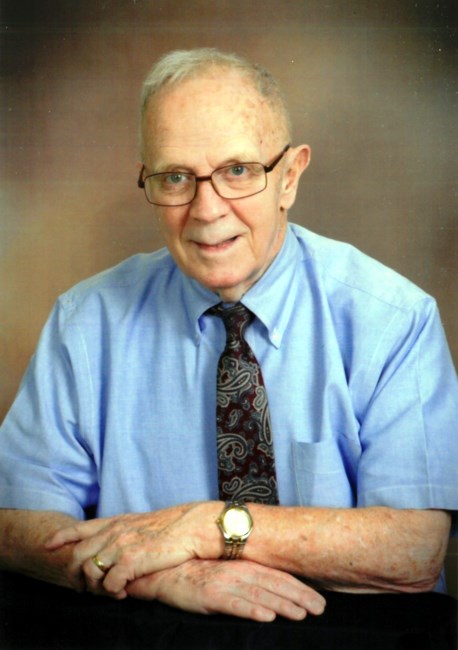 Andrew “Andy” Grant Borden was born on October 13, 1934 in Teaneck, New Jersey to Andrew Grant Borden, Sr. and Kathleen Henehan. He departed from this earth to his heavenly resting place on July 19, 2018. He was preceded in death by his parents, Andrew and Kathleen; sister Mary Brophy, brother Phil Borden; daughter Christine Foust. He is survived by his dear wife Sue Roy (Henkes) Borden; children: Patty McCarroll (Fred Delaney), Beth Cloyd, Diane Borden, Michael Borden; step-son Ben Henkes (Roxanne Henkes); grandchildren: Jennifer Loder, Kevin McCarroll, Pearl Foust, Andrew Foust, Mikaela Cloyd, Elyse Cloyd, Michael “Beau” Borden, Oliver Borden and Brock Borden, Lilly Henkes and Liam Henkes; siblings: Kathleen Hope, Bill Borden and Pat Litwitz. Andy received his bachelor’s degree from Fordham University and two master’s degrees in Mathematics from Emporia State University and Ohio State University. He proudly served his country in the US Air Force for 24 years, retiring as a Colonel. He was an AC-130 Gunship Navigator and led in the areas of Artificial Intelligence, Electronic Warfare, Strategic Reconnaissance, and served as Director of Intelligence, Strategic Air Command. He received numerous military honors including the Distinguished Flying Cross and the Legion of Merit. He also served as an Electronic Warfare Principal Scientist for NATO in the Hague. Following his retirement, Andy pursued his love of mathematics and teaching. He taught numerous mathematics classes at local community colleges and was particularly focused on helping full-time working adults who were returning to school to get a degree. One of his students wrote, “Some professors just teach, some impress, and some just love you to death. Mr. Borden was an impressing, interesting Professor of math, that makes you want to learn and learn more. Any student would be lucky to have him as a Professor.” Andy had diverse interests. He loved music including opera (his favorite was La Traviata) and Conjunto. He was also a self-taught accordion and recorder player. He didn’t miss an opportunity to entertain others with his music. He was an active member of the Accordion and Astronomy Clubs. In addition, he had recently become certified as a shortwave radio operator. Andy was also an avid square dancer where he met the love of his life, Sue. Andy had a great sense of humor and frequently phoned his grandchildren stating, “Is this the person to whom I am speaking?” He was a jokester, frequently surprising the grandkids with a gorilla mask! He never got tired of jokes. One of his favorite was: “Do you know the Jolly Green Giant? He stands in the corn and peas!” It was clear that Andy loved spending time with his grandkids, even if it meant hours in the closet looking for snakes and freezing scarecrows! He loved to engage the grandkids in conversations that would advance their knowledge or hopefully pique their interest in a new subject or idea. He always listened intently to whatever story they told and never forgot to say, “I am proud of you” and “I love you.” His curiosity about his family history led him to explore his ancestry and family ties in Ireland. He ultimately applied for and received his Irish citizenship. Andy was a proud husband, father, grandfather, brother, uncle, and cousin. He never missed an opportunity to tell you about his wife, Sue or the accomplishments of his children and grandchildren. He was a proud military servant and was “A blessing to all” who had the opportunity to know him.
VOIR PLUS VOIR MOINS