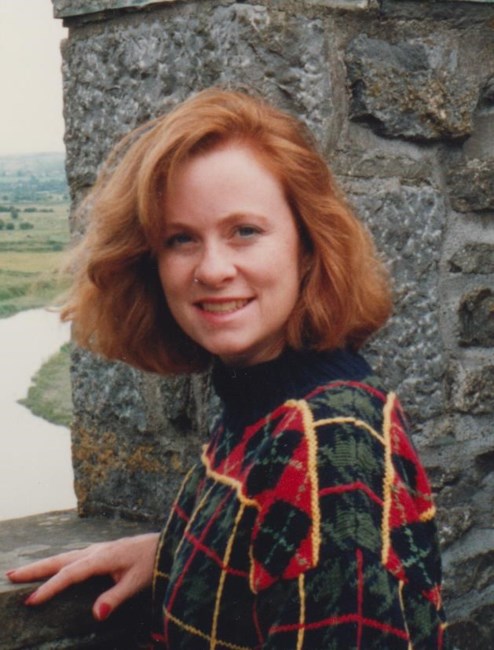 Cathleen Noonan Johnson passed away surrounded by her family on June 11, 2017 after a 15 month battle with cancer. Cathy was preceded in death by her maternal grandfather, Paul Shocklee; paternal grandparents, Richard and Mary Noonan of St. Louis; and niece, Shannon Claire Noonan. She is survived by her husband, Edward and their four children: Abigail, Caroline, Edward and Ryan; her parents, Robert and Nancy Noonan of St. Louis; her siblings, Christopher Noonan of Raleigh, North Carolina, Susanne Taylor (Stanton) of Chicago, Illinois, and Michael Noonan (Anne) of St. Louis, Missouri; her grandmother, Mildred Shocklee of St. Louis; and 14 wonderful nieces and nephews. Cathy was born on July 10, 1962 in St. Louis, Missouri and grew up in the suburb of Ballwin. She attended St. Joseph’s Academy and went on to receive her undergraduate degree at Saint Mary’s College in Notre Dame, Indiana. After working at American Hospital Supply (Baxter) in Chicago she earned her CPA and an MBA in Tax Accounting from the University of Notre Dame. She moved to Dallas, Texas where she worked for Price Waterhouse, JC Penney and Brinker International as a CPA. It was during her college days at Saint Mary’s College that she met her future husband, and luckiest man in the world, Ed Johnson. Cathy and Ed were married at The Cathedral of St. Louis the King (The Old Cathedral) in St. Louis in 1989 and lived in Dallas until they moved to Atlanta, Georgia in 1993. Cathy Johnson, MBA & CPA, retired from the corporate world in 1993 to begin the greatest job she ever had as the mother of their first child, Abby (1993), followed by Carrie (1995), Eddie (1997) and Ryan (2002). Her family was her passion and her joy. The Johnson house was filled with fun, laughter, and most of all, love. Nightly dinners were attended by all and every one of them consisted of stories, news, debates and laughs. Dinnertime was a highlight of everyone’s day. She was a proud Notre Dame Marching Band mom to Abby (Notre Dame ’16) and Carrie (Saint Mary’s College ’18). She was filled with pride watching Eddie (Notre Dame ’20) complete his freshman year and was awed by the courage displayed by Ryan (Marist School ’20), who was on the “front line” during her battle with cancer. Cathy was Ed’s best friend, biggest cheerleader and the love of his life. No child ever had a better mom. No husband ever had a better wife. Cathy was the leader of the adventure that was and is the Johnson family. We are grateful for the time we had with her and we know she is still with us. We have had a wonderful life. There will be a prayer service and visitation at H.M. Patterson & Son, Arlington Chapel, 173 Allen Road NE, Sandy Springs, Georgia 30328 Friday, June 16th from 6:00 – 8:30 PM. The prayer service will begin at 6:00 with visitation to follow. A Funeral Mass will take place at 11:30 AM Saturday morning, June 17th at St. Jude the Apostle Catholic Church, 7171 Glenridge Drive, Sandy Springs, Georgia 30328 (for GPS directions please use 705 Spalding Dr., Sandy Springs, GA 30328). In lieu of flowers the family requests that a donation be made to Chip’s Nation Foundation at http://www.chipsnation.org.
VOIR PLUS VOIR MOINS