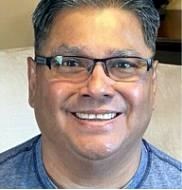 Jose “Joe” Luis Flores, 60, of Lubbock, Texas and formerly of Scottsbluff, Nebraska went to be with the Lord on Tuesday, November 16, 2021. A Memorial Service will be held at 2:00PM on Friday, December 3, 2021 at Our Lady of Guadalupe Catholic Church with Father Joseph Thambi and Pastor Ruben Flores officiating. Fond memories and expressions of sympathy may be shared at www.dugankramer.com for the Flores Family.

Jose Luis was born November 19, 1961 in Crystal City, TX to Guadalupe and Dora (Mata) Flores. He attended Crystal City High School and was an outstanding football player for the Javelinas, graduating in 1981. He later attended Texas Junior College in Criminal Justice. He transferred to the University of Texas Pan Am in Edinburg, Texas where he was pursuing his bachelor’s in social services. After college, Joe became a Police Officer for the Crystal City Police Department. After moving to Scottsbluff Joe received his Certified Nurses Aid certificate and worked at Regional West Medical Center for 25 years where his passion was taking care of people. After leaving RWMC he began his career at the Lubbock State Supported Living Center.