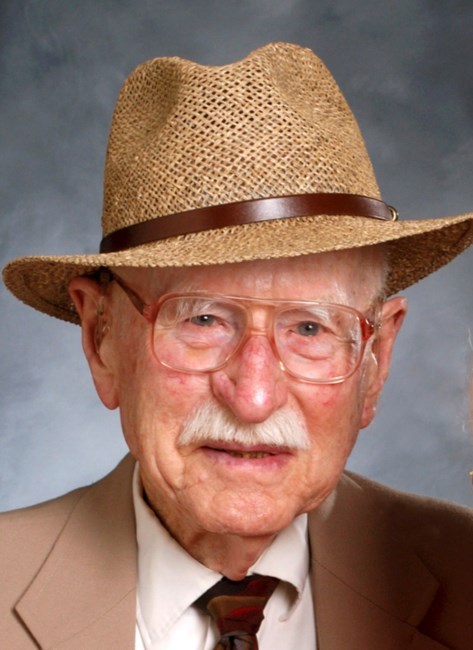 Malcolm MacKenzie Renfrew passed away peacefully at Good Samaritan Village in Moscow on October 12, 2013, his 103rd birthday. He was born October 12, 1910 in Spokane, Washington, the elder son of Earl and Elsie MacKenzie Renfrew. He spent his growing up years in Colfax, Washington, and Potlatch, Idaho. He received B.S. and M.S. degrees in chemistry from the University of Idaho and a Ph.D. in chemistry from the University of Minnesota. While at the University of Idaho he met Carol Campbell from Rosalia, Washington, and in 1938 they married in Moscow, Idaho and moved to New Jersey, where he was employed by duPont in research on new plastics. He was involved in the development of Teflon and made its first public presentation at the national meeting of the American Chemical Society (ACS) in 1946. He later became director of chemical research and development for General Mills, Inc. in Minneapolis and for Spencer Kellogg and Sons in Buffalo, New York. In 1959 the Renfrews returned to Moscow where Malcolm headed the physical sciences department of the University of Idaho. He later chaired the chemistry department and officially retired as professor emeritus of chemistry in 1976. In semi-retirement he served the university as patent director and Executive Vice President of the Idaho Research Foundation.

Malcolm was professionally active in the ACS (Fellow), holding offices in three different divisions, and long represented the Washington-Idaho Border Section in the national council. During a sabbatical leave in 1967 he was a staff member of the National Science Foundation-supported Advisory Council on College Chemistry at Stanford University and for some years continued responsibilities as director of the College Chemistry Consultants Service. He also served as safety editor of the Journal of Chemical Education and for four years was a member of the National Research Council’s Materials Advisory Board.

Malcolm was a member of the American Association for the Advancement of Science (Fellow), the American Institute of Chemical Engineers, the Society of Chemical Industry (Brit), Sigma Xi, and Phi Beta Kappa. Honors included awards for teaching by the ACS Northeastern Section and the Manufacturing Chemists Association, and the ACS Santa Clara Valley Section Award honored his service to the Society. The University of Minnesota recognized him for outstanding achievement and, upon retirement, the University of Idaho awarded him an honorary Doctor of Science degree. The ACS Chemical Health and Safety Division gave him its top award. He was co-editor of Safe Laboratories: Principles and Practices for Design and Remodeling (1990), and editor of Safety in the Chemical Laboratory, Vol. IV (1980). He was author of professional papers on plastics, chemical safety, and molecular spectroscopy. He was named to the University of Idaho Hall of Fame, the State of Idaho Hall of Fame and received the Distinguished Idahoan University of Idaho Alumni Award. He and his wife Carol received the Idaho Treasures Award from the University of Idaho Retirees Association.

In 1985, to mark Malcolm’s 75th birthday, the Physical Sciences Building at the University of Idaho was named Malcolm M. Renfrew Hall. The building was rededicated in 2010 on the occasion of his 100th birthday.

Malcolm and his wife Carol traveled extensively and visited all the continents except Antarctica.

Malcolm was a gifted watercolorist and was a member of the Palouse Watercolor Socius, Idaho Watercolor Society, watercolor societies in Buffalo, New York and Palo Alto, California. He was also a member of Phi Gamma Delta Fraternity and the Moscow First Presbyterian Church. He was a trombonist with the UI Vandal non-marching pep band, chemist, educator, gardener, philanthropist and dog lover. But, above all he was a people person who never met a person he did not like nor one he would not encourage to achieve goals that they did not know they had.

Malcolm’s friends and family would like to thank all the staff of Good Samaritan for their compassionate care of Malcolm for the past several years. Memorial contributions are suggested to the Renfrew/Campbell Science and Humanities Endowment, c/o University of Idaho Foundation, 875 Perimeter Drive, MS 3147, Moscow; the Humane Society of the Palouse, 2019 White Avenue, Moscow; Good Samaritan Village, 640 N. Eisenhower, Moscow; the First Presbyterian Church, 405 S. Van Buren Street, Moscow; or a charity of one’s choice.