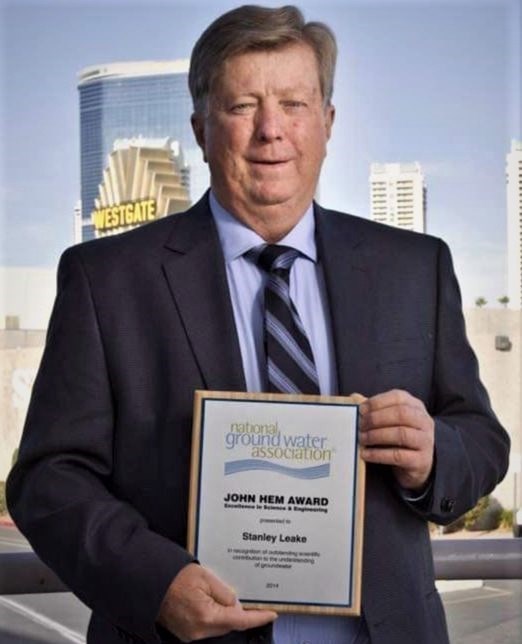 Stanley Alan Leake passed away September 19, 2022, at the age of 71. Stanley passed peacefully amongst his loved ones after a six-month battle with cancer. He is survived by his wife, Maria; his three sons, Matthew, Gabriel, and Daniel; and three grandchildren. Stanley was born April 19, 1951, in Prescott, Arizona, to Charles and Dorothy Leake, the middle of five children. Stanley spent his youth hunting, fishing, hiking, boating, and scuba-diving, and he remained an avid outdoorsman his whole life. Stanley would attend Arizona State University, where he would meet his future wife and mother of his children, Lydia. After graduating with a mathematics degree, he began working as a hydrologist for the U.S. Geological Survey. He achieved an M.S. in hydrology and spent the next four decades at the USGS until his retirement. As a well-known and respected scientist in his field, Stan made significant contributions to hydrology, including numerous publications, developing a renowned modeling software, and advising international clients as far as China, culminating with winning the Arizona Hydrological Society’s Lifetime Achievement Award in 2017. Faith in God and devotion to his family were at the center of Stan’s life. He was a member of Sonrise Bible Baptist Church for over 40 years, seen by many as a pillar of the church. When his wife, Lydia, became ill and lost the ability to walk, Stanley devoted much of the next decade to taking care of her and giving her the best quality of life possible. Later, after Lydia’s passing, Stan married Maria, and they went on to have many loving adventures together, even as his health declined. Stan was talented in almost any endeavor he chose to pursue. He enjoyed raising exotic plants, gardening, woodworking, and building and playing musical instruments. The bowed psaltery was a favorite of his. He positively impacted everyone he touched and is sorely missed by those he left behind. Fond memories and expressions of sympathy may be shared at www.funerariadelangelSL.com for the Leake family.
VOIR PLUS VOIR MOINS