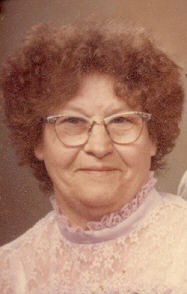 Nina May Gibson, 94 of Twin Falls, was born March 8, 1917, and passed away at her home January 10, 2012. She married Harry J. Gibson at the age of 18 and he was her loving companion until his death. They had six children, two of whom preceded her in death. Nina held various jobs throughout her life including a few years cleaning houses, three years at Green Giant, house-keeping at the Alley, and for the Salvation Army. She lived most of her life in Twin Falls and is survived by two sons, Sam and Paul Gibson; and two daughters, Patricia Alvey and Zelta Gibson. She is also survived by 10 grandchildren and 24 great-grandchildren. Funeral services will be held Tuesday, January 17, 2012 at 1:00pm at White Mortuary in Twin Falls with a visitation from noon until 1:00pm. Burial will follow at Sunset Memorial Park.
VOIR PLUS VOIR MOINS