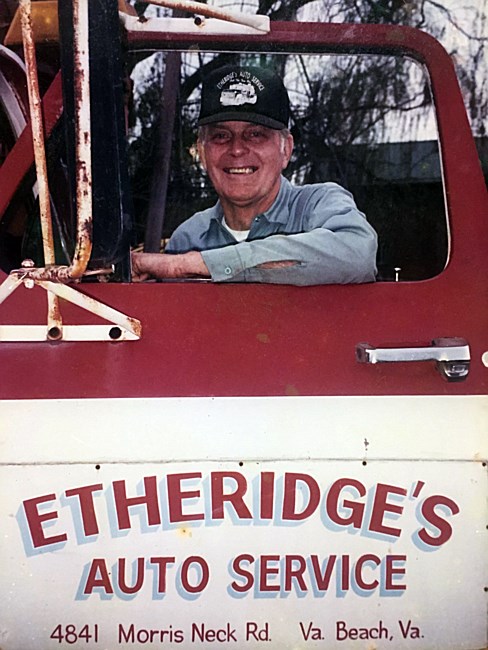 James Edward Etheridge, 79, passed away at home October 23, 2017. Jimmy was predeceased by his parents, Julian Baylor and Elizabeth Falconer Etheridge; sisters, Joyce Phillips and JoAnne Stutzman. He is survived by his wife, Malinda Etheridge; children, Hope, Richard (and wife Suzanne), Jay, and Kim (and husband Matt Leware) ; grandchildren, Taylor, Russell, Hunter, Jim, Candice, Erianna, Crystal, Sara, and Hannah; and 6 great grandchildren; brothers, Julian (and wife Marsha) and Shelby (and wife Elaine); sisters, Mary Ellen Brinkley and Bettily Chapman; brother-in-law Bill Stutzman; and many nieces and nephews and extended family. Jimmy lived his entire life on the family farm in Back Bay and was a lifelong member of Oak Grove Baptist Church. He graduated from Princess Anne High School in the top ten percent of his class. He served in the United States Coast Guard as an airplane mechanic and loved flying. Jimmy married his wife Linda November 4th 1967 and would have been married 50 years on that date this year. One of his greatest joys was stopping during work to talk to friends. He loved to take his family to the beach with his Ford model A (the Puddle Jumper). He could climb Penney’s Hill in North Carolina on the steep side which started a lot of drivers to do the same with much more powerful engines. He was an expert tow truck operator and could do more with his little 1953 Ford wrecker than most could do with a larger truck. He appreciated a good challenge. He welded and repaired farm equipment for many farmers and was known as their MacGyver. He ran his tow service and repaired automobiles in Princess Anne County and Knotts Island for many years and made a lot of friends along the way (his extended family). He will be greatly missed by many. The family will receive friends on Sunday, October 29, 2017 from 4 to 6 p.m. at Smith & Williams Funeral Home, Kempsville. A funeral will be held on Monday, October 30, 2017 at 2 p.m. at Back Bay Christian Assembly, followed by burial and a reception at Oak Grove Baptist Church, 961 Princess Anne Road. You may offer condolences to the family at www.smithandwilliamskempsville.com.