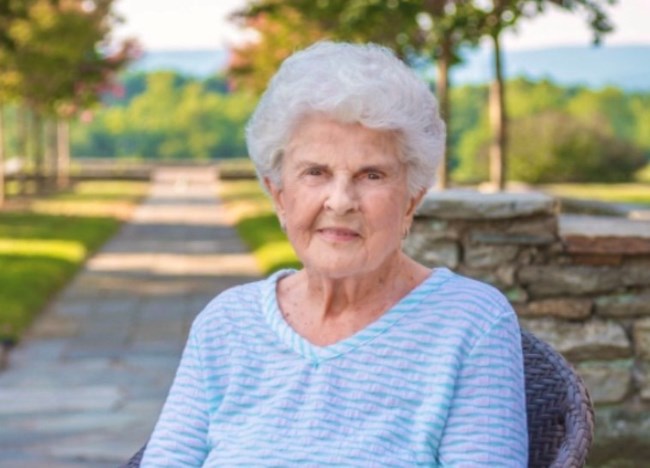 Jane Loretta (Goyne) Bainum, 101, died August 23, 2021, at her home in Chevy Chase, MD. Born November 19, 1919, in Tillamook, OR, and raised in Pennsylvania, Mrs. Bainum was a devoted mother and wife, a committed philanthropist, and a devout, lifelong member of the Seventh-day Adventist Church. She graduated from Shenandoah Valley Academy in New Market, VA, in 1938, then continued her education at Columbia Union College in Takoma Park, MD, where she met her husband, Stewart Bainum, Sr. The two wed in 1941 and were blessed with four children, 10 grandchildren and nine great grandchildren. The Bainums raised their family in Takoma Park and Silver Spring, MD, as they built several successful businesses together. In 1968, Stewart and Jane established a charitable foundation known today as the Bainum Family Foundation, based in Bethesda, MD. For more than 50 years, the Foundation has supported the well-being of children and families, with a special focus on those affected by racism and poverty in Washington, DC, and beyond. In recent years, Mrs. Bainum divided her time between Chevy Chase and Naples, FL, where she enjoyed spending time with friends and extended family. She was an avid reader and fervent fan of local professional sports teams, including the Washington Football Team and the Washington Nationals baseball team. She was preceded in death by her husband in 2014, her parents (Beulah and Hillary Goyne), two brothers (Richard Goyne and Arthur Goyne and their wives) and brother-in-law Irvin Bainum (Evea). She is survived by her best friend and brother Robert Goyne (Barbara); her brothers- and sisters-in-law Robert and Charmaine Bainum and June and Charlie Hill; and her children Barbara Bainum (Wilfried Busse) of Chevy Chase, MD; Stewart Bainum, Jr. (Sandy) of Chevy Chase, MD; Roberta Bainum of Longwood, FL; and Bruce Bainum (Charlene) of Angwin, CA, along with her beloved grandchildren and great-grandchildren, many nieces and nephews, and other relatives and friends. Services for Mrs. Bainum will be private. In lieu of flowers, memorial donations may be made to the Jane Bainum Fund at the Greater Washington Community Foundation, which supports a range of nonprofits serving children and families as well as faith-based organizations. Gifts can be made online at www.thecommunityfoundation.org/donate (specify the “Jane Bainum Fund”) or by check to Greater Washington Community Foundation, PO Box 49010, Baltimore, MD 21297-4910.
VOIR PLUS VOIR MOINS