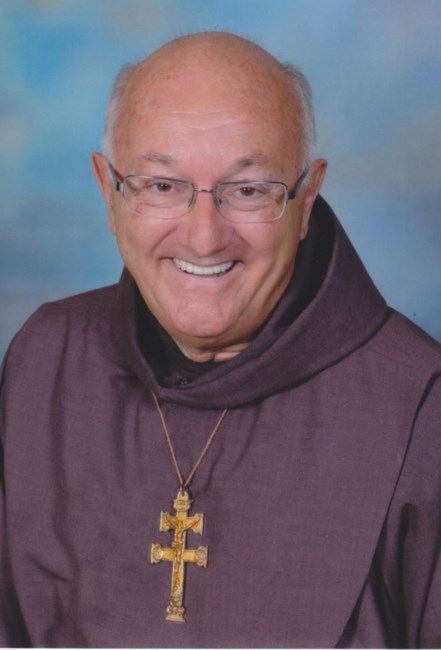 Fr. Joseph Scerbo, S.A. February 14, 1944-March 19, 2015 Joseph Michael Scerbo was born to Angelina and Severio (“Sam”) Scerbo on February 14, 1944 in Hoosick Falls, New York. When Joseph was young, the Scerbo family relocated to Mechanicville, New York where he attended school. His high school experience was decorated with academic, athletic, and leadership honors, including president of the student council, captain of the cross-country running team, prom king, and honors in debate, public speaking, and french horn performance. In his memoir, Always Forward (to be released in May), Joe explained, “At the core of my being, I knew God’s hand was upon me.” And so, upon his graduation from Mechanicville High School in 1961, Joseph declined full scholarships to Georgetown, Johns Hopkins, and Marquette Universities to become a priest in the Roman Catholic church. He enter the Franciscan Friars of the Atonement in July of 1961 where he experienced “the joy of Franciscan fraternity”. In 1970, Joe was ordained to the priesthood by Bishop Pernicone of New York and began a public, life-long ministry in faith, reconciliation, and healing. His ongoing studies earned him a doctorate in psychotherapy from the Graduate Theological Union in Berkeley, California which, combined with his faith, provided the foundation for his future ministry. Among the many roles Fr. Joe held in his 45-year priesthood were therapist at the Institute for Christian Healing in Pennsylvania, retreat master for the Franciscan Friars of the Atonement in Garrison, New York, campus minister at Howard University and Los Angeles City College, President of the Association of Christian Therapists, Historical Advisor to the docudrama on Junipero Serra, “Ever Forward, Never Back”, and missionary to Kenya and India. Additionally, Fr. Joe’s greatest joy was to spend seventeen years serving as the Academic Dean at Trinity College of Graduate Studies where he built up programs to train and graduate 700 Christian therapists. In 1998, Fr. Joe accepted an invitation to live and work at Mission San Juan Capistrano in California as the first Franciscan friar on staff in 155 years, serving as a parish priest and leading various inter-faith projects. Offering a Franciscan presence to the Mission community was an opportunity for which he was “truly grateful and humbled”. In 2007, Fr. Dave Heney of St. Paschal Baylon in Thousand Oaks, California asked him to serve in his faith community. Of his eight years in Thousand Oaks, which would be the final years of life, Fr. Joe said, “At St. Paschal Baylon, I experienced every joy of the priesthood. I experienced an outstanding pastor in Fr. Dave Heney. Parish life at St. Paschal Baylon demonstrated what parish life can be like in its most dynamic state. To witness this zeal, this dynamism, this outpouring of love for Christ and the Eucharist brings tremendous life to my own heart.” During this time Fr. Joe also served on the Ventura County Interfaith Council. After a two year battle with pancreatic cancer, during which he received an outpouring of support and care from his community at St. Paschal Baylon, Fr. Joseph Scerbo entered eternal life on March 19, 2015, the Feast of St. Joseph. He was 71 years. To his extended family, friends, and the many who knew him, Fr. Joe leaves a legacy of joy, finding God’s will in every moment, and blessedness. Within the final words of his memoir, he reminds us: “Our journey on this earth and our quest for happiness is rooted in our availability to God’s will and His call to human relationship. Sometimes following God’s will makes us uncomfortable. Sometimes His will for us makes others feel uncomfortable. Yet in sickness and in health, triumphs and failures, childhood and all that follows, God has a Divine Will for every moment of our every day. It is up to us to say, ‘Lord, open the doors you want to open, close the doors you don’t want to open, and place me in the center of your perfect will.’ It is up to us to draw as close to Him as possible, to embrace the Eucharist and a desire to know and imitate Christ, so we are open to receive the graces poured into our hearts from His Chalice.” For more information about Fr. Joe's memoir, visit AlwaysForwardBook.com.