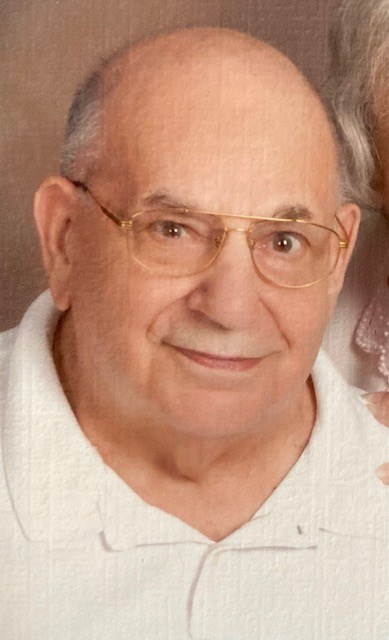 JAMES DELANO GEIGER Of Williamston – James “Jim” D. Geiger, 88 of Williamston, Michigan, passed away peacefully on September 17, 2022. James was born in Flint, MI on October 4, 1933, the son of the late Frank and Julitta A. (Houle) Geiger. Jim graduated from Flint Central High School in 1953, and would go on to honorably serve his Country during the Korean War by joining the United States Army where he served for two years. He would work and retire after 40 years of service with the Flint Journal. Jim’s pride and joy was his marriage of 56 years to his late wife, Elizabeth “Betty” Sarah (Montagnese) Geiger. Jim will always be remembered for the fond memories he made by spending time with his family and friends. He and his wife were “snowbirds” traveling annually to Florida with his brothers. Jim and his brothers spent many afternoons in Florida watching the races at the dog tracks. He would always be his grandchildren’s number one fan in cheering them on at any sport or band event; and of course, he always held a deep love for U of M football and the Detroit Tigers. Jim is survived by his son, Matthew Geiger and loving daughter-in-law Lynn; his two grandsons, Stephen and Will; his sister-in-law, Sharon Montagnese; sister-in-law, Loretta Montagnese; and many loving nieces & nephews. James is predeceased by his loving wife; Betty, his brothers; William Geiger; Charles (the late Frances) Geiger, Richard (the late Helen) Geiger, Robert Geiger, and brother-in-laws, Anthony Montagnese, and brother-in-law Joseph Montagnese. A Celebration of life in memory of Jim will be held on October 14, 2022 at 11:00AM at St. Thomas Aquinas Parish, 955 Alton Road, East Lansing 48823, Family will greet friends and family starting one hour prior to Mass at 10:00AM. In lieu of flowers the Geiger family requests for donations to be made in Jim’s name to the American Cancer Society or Hospice of Michigan. Fond memories and expressions of sympathies may be made to the Geiger family at www.grwilliamston.com
VOIR PLUS VOIR MOINS