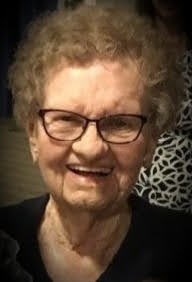 Betty J. Harris, 93, of Selah, WA died January 21, 2022 at Yakima Memorial Hospital as the result of COVID-19. Betty was born July 2, 1928 in Sioux City, IA to Clarence and Geneva (Riley) Hardy. After surviving a tornado as a young girl she moved with her grandmother Susan (Sudie) and her husband Ed Hermann to Mabton, WA in 1941 where she grew up harvesting hops, grapes and hoeing the mint fields. Betty graduated from Mabton High School on May 28, 1946 and was married to her high school sweetheart, Ralph F. Harris, the following day. Ralph and Betty enjoyed 23 years of marriage and raised three children before his death in a semi-truck accident in 1969. They moved to Yakima, WA in 1967 where she remained until moving to Selah in 2020 to be with her daughter Pamela Covey. Following her husband's death Betty started cleaning homes for several families in Yakima. They were soon to learn that Betty's standard of cleanliness was truly next to godliness. She was a loved and cherished member of each household she cared for. While living in Yakima Betty cultivated close friendships with the Storms, the Striefs, Leona Stewart and many others that she enjoyed until her death. She was a famous cook and had a well-established reputation for being able to organize a feast on little more than a moment's notice. As such, countless friends and relatives over the years called upon her to preside over family meals, wedding receptions, baby showers, Memorials and congregation gatherings. Her homemade macaroni and cheese was the creamiest. Waffles on Saturday mornings were a favorite of her grandchildren. Grandma Betty, as all knew her, was generous with her love and a no-nonsense disciplinarian. She was forthright and could be feisty. You never wondered where you stood with her. She wasn't above administering a big spank on the behind, especially when it was well earned. She always ironed her pillowcases so as to avoid placing any wrinkles on her face. She believed in good health and remained physically fit until the last two years when dementia began to challenge her. On November 15, 1941 Betty dedicated her life to Jehovah God and was baptized as one of Jehovah's Witnesses. One of her greatest joys was discussing the Bible and its wonderful hope for the future with anyone she met. She would want others to be comforted in knowing that she is not suffering because she believed with all her heart what the Bible teaches at Ecclesiastes 9:5, " ... the dead know nothing at all:' She is sleeping, awaiting the time stated at John 5:28, 29 where Jesus will wake her up and bring her out of the memorial tomb, a resurrection to a paradise earth-not an earth like we see today, but a cleansed one where God's promises will be a reality. Promises such as those found at Revelation 21:4 which says, "And he will wipe out every tear from their eyes, and death will be no more, neither will mourning nor outcry nor pain be anymore. The former things have passed away." An earth-filled with peace and happiness, no sickness, death or sorrow, nothing causing pain or heartache, abundant food and housing for all, no injustice, global unity- where she will entertain the glorious hope of living forever reunited with friends and family she loved so dearly, especially her husband. She will want to see all of you there when she opens her eyes. Two daughters survive Betty: Julie Harris of Yakima, WA and Pamela Covey of Selah, WA. She is also survived by her grandchildren: Stephanie Harris (Chris Johnson), Andrea Harris, Meranda Covey (William Cox) and Audra Studdard (Robert) all of Yakima, WA and Garth Covey of Selah, WA as well as her brother, Robert (Alice) Hardy of Orofino, ID and sister Barbara Rasmussen of Orofino, ID along with 6 great-grandchildren and 2 great-great-grandchildren. Betty was preceded in death by her parents, her husband, 2 sons: Randall Harris and Lynn Harris, a sister: Donna Dodson and a granddaughter, Kietra Covey. A memorial service will be held via Zoom on Saturday, February 12, 2022 at 2:00 p.m. Fond memories and expressions of sympathy may be shared at www.keithandkeith.com for the Harris family.
VOIR PLUS VOIR MOINS