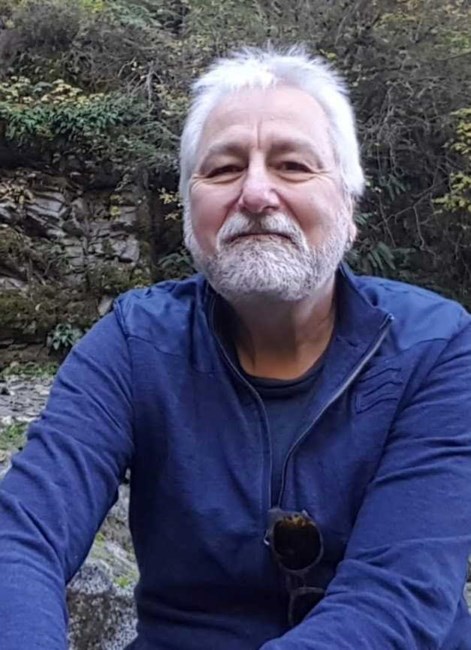 Peter Ronald Biggs, aged 72, of Abbotsford, BC, passed away on October 31, 2022 after battling illness for two years. Peter was born on January 21, 1950, in Bristol, UK to Victor Morley & Muriel Marguerite Biggs, older brother to John. In his young adult years, Peter was a musician, playing rock music and singing with Ixion’s Wheel. At the age of 22, Peter found the Lord and was baptized at Walton Baptist Church. He then toured with the Meet Jesus Band. Expressing himself as a musician and Christian were the greatest joys of his life. He was a bassist, guitarist and drummer last performing in 2019 with the “LADS” in the UK to celebrate that they were all turning 70. On June 19, 1978, Peter graduated as a “General Nurse” returning to the home where he worked as a care aide as a Deputy Officer in Charge to continue to serve physically disabled residents. At age 31, Peter attended the All Nations Christian College where he graduated from Biblical, Theological, Cultural and Missiological studies with a passion to express his faith and convictions in a vocation of ministry and service to God. There he met Dauna, his first wife at age 32. Immigrating to Canada in 1983 Peter’s career took him from Church of the Way in Winnipeg to BC to pastor congregations, to news media and web development and to the Ruth and Naomi (RAN) Mission in Chilliwack where he served as Director of Community Services. After retirement, Peter continued to serve as leader of the volunteer Saturday night team at RAN where he found deep affection and connection with those in recovery and those who were living with insecure housing or homelessness. Peter cared genuinely about people, their names and their stories. Peter was deeply impacted by the mountains, particularly Mt. Baker and The Golden Ears. He sought out the mountains both as a leader of an Abbotsford hiking club as well as a source of connection with His Creator. The mountains were a view and a place where Peter felt the close presence of His Lord. In 2018, in the parking lot at Level Ground Church, Peter approached Karen to request an interview about seniors for the Light Magazine. For Peter and Karen, every day together was a gift – one that they enjoyed through travels in 2019 to Tobago where Peter cheered on the Titanium Dragonboat Team in the PAN-AM games and to the UK for a reunion with the “Lads” to perform and go sailing on the Broads. Their very special relationship flourished into marriage in Grant’s Landing on the Fraser River, on June 13, 2020. In September 2020, Peter collapsed as a result of a brain tumor. With Karen’s enduring support, Peter navigated many arduous procedures and challenges. In July 2021, Peter moved to Menno Place where he was supported by the amazing care and compassion of the West 1 Menno Home team. Peter saw this care as a daily blessing for which he was deeply grateful. God was faithful to bring peace and joy to Peter and Karen. On October 31st, 2022, with his dear friend PJ of 68 years by his side, Peter crossed over to his heavenly home with the Lord whom he loved. Peter is survived by his beloved wife, Karen, sons Adam and Simeon, daughter Zoe, stepsons Jason and Matthew Baillie, their partners and four grandchildren and his brother John Biggs(wife Angela) in the UK. A Celebration of Life will be held on Monday, November 14 at 12:00PM at Level Ground Church, 31216 King Road. In lieu of flowers, donations may be made to Menno Place, Ruth and Naomi’s (RAN) Mission or Level Ground Church. www.MennoPlace.ca/Peter
See more See Less

In Memory Of Peter Ronald Biggs