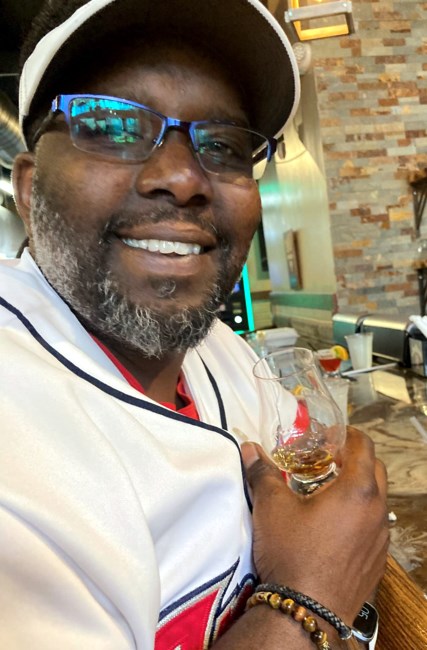 Terrence Leroi Davis, born July 13th 1976 in Cleveland Ohio, devout follower of Christ, faithful and loving provider for his family, and community leader was ushered to paradise to be reunited with God on January 19, 2023. Terry, as many called him, had a beautiful 22-year marriage with his high school sweetheart Stephanie and raised 3 amazing children whom he loved beyond all measure. From community outreach through the Buckeye State Credit Union to greeting church goers every Sunday morning at The Chapel in Akron as a faithful member, Terrence’s pure and loving heart was a gem for everyone he encountered. Everyone knew how much Terry loved our Lord Jesus Christ. His prayers and the way he lived his life were always a testament to his incredibly strong and robust faith. Terrence had a love for sports, particularly football, basketball, and track which started at a young age at Woodridge elementary school. Though Terry was heavily involved in athletics, another defining interest he had was the outdoors. He had a particular love for coyotes and gardening, even winning awards from the Keep Akron Beautiful Association for his beautiful well-kept lawn and flower beds which he proudly displayed. Terrence exemplified honest ambition for success and perseverance and at a young age began his own landscaping business while simultaneously opening many multimillion-dollar Lowe’s locations from a managerial position, providing a clear example for many on how to continuously strive to reach their fullest potential. Terry in many ways served as a liaison between Lowes and many community volunteer organizations such as Habitat for Humanity and Safe Landings. Terrence's selfless spirit continued later into his career when he joined Buckeye State Credit Union where he became an integral part of a compassionate team that believed in investing and helping surrounding communities and people. As part of the Buckeye State Credit Union executive team, he taught financial literacy, free of charge for those in need; even providing financial wisdom and guidance for those previously incarcerated as he always aspired to make a positive impact in people’s lives. When it came to the unity of his family, Terrence could be described as the glue that everyone relied on to keep everything together. To call Terry a family man is an understatement. “Family” to Terrence was more than a word, it was what made him who he was and his way of life. As a husband and father, he was a true representation of devotion, love, and sacrifice. As a son, his love for his mother Francine Barnes was rare, powerful, and perfect. He deeply loved his brother Eric Davis and embraced being a brother to so many who loved him. As a nephew and cousin, his love for his aunties, uncles, and cousins never faded. He truly embodied and embraced being “Uncle T” for his nephews, Eric and Terrance Davis. He cherished the moments spent with his nephew Zaire. To be fair, he was “Uncle T” to many, many more and he was honored by it. Terrence’s family-oriented lifestyle and love extended past those who shared his same blood. Terrence was liked, but more importantly loved by so many people from all varying walks of life. It always seemed like there wasn’t a person he didn’t know. Although Terry is rejoicing in Heaven by being reunited with his mother Francine Barnes, Auntie Gerrie, Uncle Rick, Uncle Harry, Grandmother Ora Lee Huey, Grandfather Daniel Caldwell, Aunt Alice, Cousins Bruce and Melvin, Father-in-Law Reginald Manley, and Mother-in-Law Therese Fair, his legacy will continue to strongly live on in his wife Stephanie Davis and their children Kyla (Brooks), Marty, and Camden. His unity. His life. His loves. Friends and family may come to call on Friday, January 27, 2023 from 4-7 p.m. at Rose Hill Funeral Home, 3653 West Market Street, Akron. A memorial service will be held on Saturday, January 28, 2023 from 12-2 p.m. at The Chapel, Memorial Chapel Room, 135 Fir Hill, Akron. Private burial will be held at Mount Peace Cemetery.
See more See Less

In Memory Of Terrence L. Davis