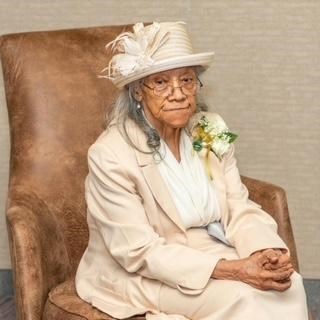 Bessie “MaDear” Havard was born June 2, 1919, in Vicksburg,Mississippi to the union of Joseph and Helen (Spradley) Havard. Bessie accepted Christ at an early age and was a member of Mount Ararat Baptist Church. She proudly served on the usher board for many years.

Bessie was a hard worker, committed to her family, and lovingly called MaDear by all who knew her. She was the proud mother of eight children. After rearing her children, she also helped raise grandchildren and great-grandchildren. Her home was a haven where her grandchildren enjoyed home-cooked meals, dancing, and loving care.

After a season of illness, she relocated to Albion, Michigan to live with her daughter, Marjorie Lewis Wilson. While in Albion she was a member of Bethel Missionary Baptist Church. She took pleasure in going to worship service until her health prevented her from attending.

On May 26, 2019, she was surrounded by her family and friends to celebrate her 100th birthday. She received proclamations from the federal, state, and local government acknowledging 100 years of a life well lived. She continued to be celebrated as a centenarian in Calhoun County Michigan for the next two years. Her life is featured in the stories of 2021 Centenarians of Calhoun County.

In Memory Of Bessie "MaDear" Havard