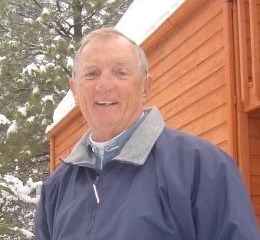 Gilbert "Gil" John Malach, age 87, of Louisville, Tennessee passed away on Friday, June 17, 2022. Gil was born on August 16, 1934, in Sublette, IL, to Gilbert A and Ruth Dinges Malach. He was raised in Sublette, Joliet, IL, and Chattanooga , TN, before the family settled in Knoxville. After his graduation from Knoxville Catholic High School, Gil served in the Marine Corps before returning to Knoxville. He married the love of his life, Rosemary Wright, in 1957, and they were happily married until her death in 1997. He got his dream job with Delta Airlines in 1959, and moved from Columbus, OH to Atlanta to Houston to Jackson, MS and finally to Montgomery, AL, where he finished out his career as Station Manager. Gil retired from Delta in 1993, then worked at Wynlakes Golf Course for another several years. In Montgomery, Gil and Rosemary helped to start Holy Spirit Catholic Church, and Gil was actively involved with the parish until he moved back to Knoxville in 2010 to help take care of his sisters, Della and Donna. He did nearly everything at Holy Spirit, including but not limited to mowing, helping organize the annual spaghetti supper, singing in the choir, changing lightbulbs, and acting as a Lay Eucharistic Minister. Gil was known for his sense of humor, his loyalty, and his big heart. He was always ready with a joke or help for anyone who needed it. He was also known for throwing himself into every activity with enthusiasm, often leading to injury, a common Malach condition. Gil was preceded in passing by his parents, his wife; Rosemary; brothers, Eugene and Gerald: sisters, Kay, Della, and Donna. He is survived by his loving daughter; Michele (Robb Brantley) Malach of Colorado; brother, Philip, nieces, nephews, cousins, and close friends The family will honor Gil on Saturday, August 6, 2022 with services at Our Lady of Fatima Catholic Church, 858 Louisville Rd., Louisville, TN, with Receiving of friends from 9:00am to 10:00am with a Funeral Mass to follow at 10:00am. In Lieu of flowers, please make a donation in honor of Gil to Knoxville Catholic High School, 9425 Fox Lonas Road NW, Knoxville, TN 37923, www.knoxvillecatholic.com/make-a-gift or to the charity of your choice. Online condolences and fond memories may be shared with the Malach family at www.sherwoodchapel.com
See more See Less