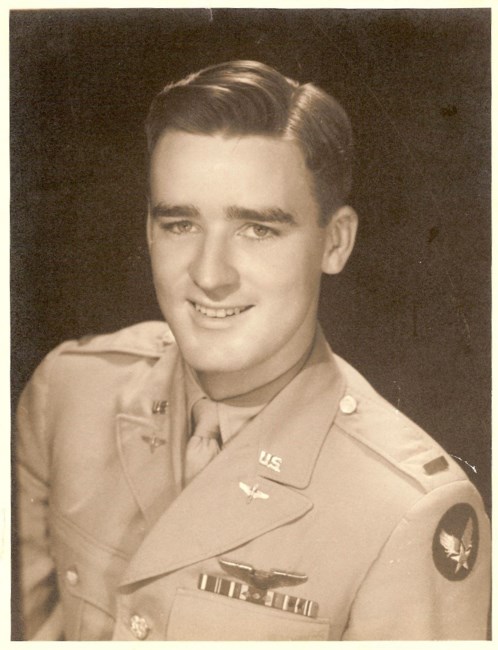 One of the last of America’s Greatest Generation is gone. Bernard Thomas Nolan (Barney) passed away on November 30, 2021. He was 99 years old. Barney was born in Forest Hills, NY and came of age in Astoria during the Great Depression. He began earning his own way at age 14 and left school at age 17 to help provide for the family. From an early age Barney’s passion was airplanes and he devoured books and magazines on the topic. He joined the Army Air Corps in 1943, primarily because his dream was to fly. (He almost didn’t make it because he was two lbs underweight.) He was stationed with the 487th Bomb Group of the Mighty Eighth Air Force in Lavenham, England and flew 33 missions over Germany and France during WWII. Upon return, he was stationed at Charleston AFB in South Carolina. As fate would have it, Barney met the “girl with the green eyes” at a dance at the Officer’s Club. He had to meet Sunny Davis. They were engaged one month later and married five months after that. Sunny went all over the world with Barney until they settled in Northern Virginia in 1958. On December 8, Barney and Sunny would have been married 76 years. Following WWII, Barney flew C54s to Cairo, Casablanca, and Tripoli as part of the Crescent Caravan. Deployments in the 1950s-60s included Air Bases at Lajes and Ramstein, Andrews AFB, and the Pentagon. Barney earned a B.S. degree in Military Science at the University of Maryland in 1957. He had finessed his way into the Aviation Cadet program without a high school diploma, but graduated with honors from UM - a testament to his smarts, intellect, and work ethic. After he left the Air Force in 1965, Barney worked for NASA as an airborne geosciences program manager until 1981, then as an independent consultant until 1996. This work emphasized airborne measurements of earth resources to enhance satellite observations. In the 1990s he directed field operations for a NASA rainfall measurement mission in Australia, a highlight of his later career. He also published four books and several magazine articles, and gave numerous lectures of his experiences as a B-17 and B-24 bomber pilot during WWII. He was one of the few to have flown both aircraft in combat. In addition to his professional life, Barney was a skilled cabinet maker and made early American pieces of his own design. He studied piano later in life and learned to play classical compositions. His love of music spanned piano concertos, big bands of the swing era, and orchestral works by George Gershwin. Barney also was an avid student of history and read extensively on ancient times up through modern day events. Barney was a devoted husband and father, and he consistently treated others with kindness and respect. He leaves behind his beautiful Sunny, daughter Pam and son Tom, daughter-in-law Jacquie, and granddaughter Christine and her husband Marc. Further information will be forthcoming on his burial at Arlington National Cemetery. Fond memories and expressions of sympathy may be shared at www.DemaineFuneralHomes.com for the Nolan family.
See more See Less

In Memory Of Bernard T. Nolan