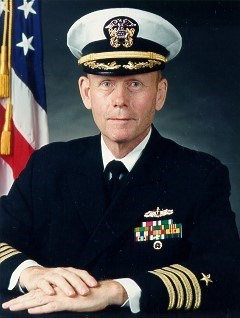 John Lee MacMichael Captain John “Skip” MacMichael, U.S. Navy, Retired, 77, died Thursday, July 4, 2019 after a six-year battle with sarcoma cancer. Born in Norristown, PA, on October 16, 1941, Captain MacMichael was the eldest child of Edward A. and Mildred E. MacMichael. When he was born, his father was serving onboard the merchant freighter MS Sea Witch in the Pacific. He acquired his nickname when the doctor announced, “looks like you have another ‘skipper’ in the family!” Skip fulfilled his sixth grade prophecy by serving 26 year in the US Navy. In 1965 he graduated with merit from the United States Naval Academy, and subsequently served as a Surface Warfare Officer, primarily in destroyers, but also in amphibious forces. His at-sea tours included USS McMorris (DE-1035), USS Marathon (PG-89), USS Bradley (FF-1041), and USS Barnstable County (LST-1197). He commanded USS Chewaucan (AOG-50) and USS Thomas C. Hart (FF-1092). As Surface Operations Officer on the staff of Commander, Cruiser Destroyer Group Twelve, he deployed aboard USS America (CV-66) and USS Iowa (BB-61). His final tour was as the first Commanding Officer of Naval Warfare Assessment Center in Corona, CA. His personal awards include the Legion of Merit, Meritorious Service Medal with gold star, Navy Commendation Medal, and Navy Achievement Medal. Upon his retirement in 1991, he returned to the East coast where he followed his second passion – railroads. He spent the next 23 years working for AMTRAK in the Mechanical & Transportation Departments and then for the Office of the Inspector General. He was the Senior Director of Metroliner Services between New York and Washington, DC; Product Manager of Acela Product Line; and the Director of Inspections & Evaluations Division in the Office of Inspector General. He frequently said with pride that he “had the honor of riding every major long distance train in the country” as he carried out his assignments. Captain MacMichael attended the University of California at Berkeley in 1961; received a Bachelor of Science in Engineering from the United States Naval Academy in 1965; and received a Master of Science in Personnel Administration from George Washington University in 1977. He met the love of his life, Jo, at a conference at the University of North Carolina at Chapel Hill; they celebrated their 54th anniversary days before his death. Left to cherish his memory are his wife Josephine Wiens MacMichael, brother Edward (Anne) MacMichael, Jr., sons John (Marinez) and James (Shannon) MacMichael, and six grandsons: David Maloof, Jacob (Haley), Noah (Noell), John, Ryan, and Brendan MacMichael. Skip was confirmed at St. Luke’s Episcopal Church in Alexandria, VA, and twice served as a member of the Vestry. He was a passionate reader with interests in military and civil war history and politics. His family is grateful for the tremendous support of family and friends during his lengthy illness. The family will receive guests from 6:00 – 8:00 pm on July 12, 2019 at Demaine Funeral Home, 520 South Washington Street, Alexandria, VA 22314. A Memorial Celebration will be held on July 13 at 2pm at Saint Luke’s Episcopal Church, 8009 Fort Hunt Road, Alexandria VA 22308. Interment will be at Arlington National Cemetery on Friday, March 20, 2020 at 9:00am. In lieu of flowers, the family suggests donations in his memory be made to the V Foundation, Victory over Cancer. Fair winds and following seas, Captain MacMichael.
See more See Less

In Memory Of John Lee MacMichael