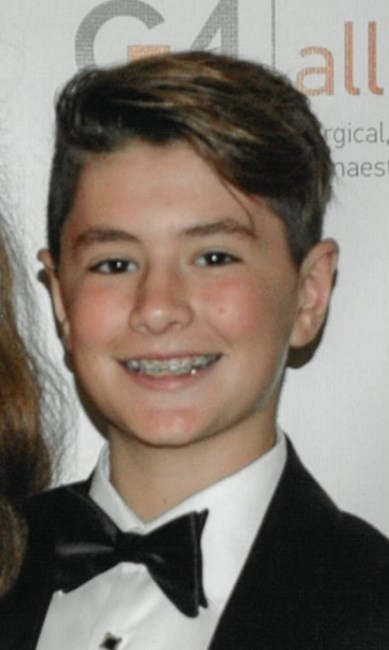 Peter B. Webster III of Alexandria, Virginia passed peacefully on June 9, 2018. He is missed by many whose lives he brightened with his quick smile and a joyful presence. Peter was born at George Washington University Hospital in 2003 and grew into a strong, respectful, and kind-hearted young man. He was playful, adventurous, thoughtful, entrepreneurial, curious, inspiring, and occasionally impulsive. He loved generously and wore his heart on his sleeve. An 8th grader at Commonwealth Academy in Alexandria, Peter recently learned to play the ukulele and loved strumming and singing “Lava,” “Somewhere Over the Rainbow,” and “Smells Like Teen Spirit” - the unplugged version. He took voice lessons and had an angelic tenor that was beautiful and soothing. Peter was a Fort Hunt All Star baseball player, who spent years with the Mount Vernon Mavericks travel team and perfected two fastballs and a curveball. In his final year of Little League, he also mastered a knuckleball which, to the chagrin of his coaches and the delight of his teammates, he tested against two batters in a live game. Fortunately he was successful. Peter was big-hearted and his empathy warmed and supported those around him, especially those who were younger or less assured than he. When a new student transferred into his school, Peter adopted the boy to show him the ropes, sit with him in the lunchroom, and ensure a warm entry into the community. He had immense charisma and a broad smile, which attracted others to him whether adults or peers. His sense of adventure and enthusiasm for life were infectious and inspired others to follow. He was fun and daring and possessed an inner confidence. He was Huck Finn, embodying charm, wit, intelligence, magnetism, and just a touch of mischief in his adventures. Most of all Peter loved the outdoors, especially hunting and fishing. He fashioned an arsenal of homemade hunting tools including slingshots, blowguns, bows and arrows, and even a working crossbow, which he designed and built for a class project. Since the family rule was that if you kill it you must eat it, Peter treated his siblings, parents, and extended family to small game, fowl, and amphibians, including squirrels, morning doves, and frog legs. He perfected a brown sugar barbecue rub to enhance the flavor of those morsels. During a father-son camping trip last year, Peter bagged a full grown snake, then grilled it up over charcoal with black pepper, salt and a touch of olive oil. The dozen other boys who gathered around to witness the spectacle all got to join in the tasting. Peter’s crowning achievement as a latter-day Daniel Boone was the successful design and deployment of a rabbit snare in his backyard. He came bounding in the door one summer afternoon to announce proudly he had caught a rabbit. Parental inspection did indeed reveal a long-eared lagomorph dangling by a paw from a tree limb. Peter had taught himself to make a snare by watching YouTube videos. Using sliced bananas as bait, he strung up the snare with a baseball trophy as a counterweight. Peter was born 200 years too late, and 200 miles away from the wilderness that would have allowed him fully to develop his innate passion for the outdoors. Peter will be missed by many dear friends in the Fort Hunt community, whose outpouring of love and support is a great source of comfort to his family. He is survived by his father Todd Webster, his mother Lisa Arfaa, his sisters Sydney (16) and Catherine (11), his grandfather Peter B. Webster of South Portland, Maine, his grandmother Dottie Ferris Arfaa of Dallas, Texas, many beloved aunts, uncles, cousins, and many more friends in the Fort Hunt community and beyond. Visiting hour are Thursday, June 14 from 4:00 p.m. – 8:00 p.m. at Demaine Funeral Home, 520 South Washington Street, Alexandria, VA 22314 A Celebration of Peter’s life will be held on Friday, June 15 at 11:00 a.m. at Aldersgate United Methodist Church, 1301 Collingwood Rd, Alexandria, VA 22308 In lieu of flowers, the family requests donations to the National Park Service Foundation, which raises private funds to expand, protect, and bring more young and minority visitors to our national parks. Peter had explored several of these treasures and looked forward to many more. Donations can be made at www.nationalparks.org/donate and donors can click on the tribute button (step three) and share that they are donating in Peter’s name.
See more See Less