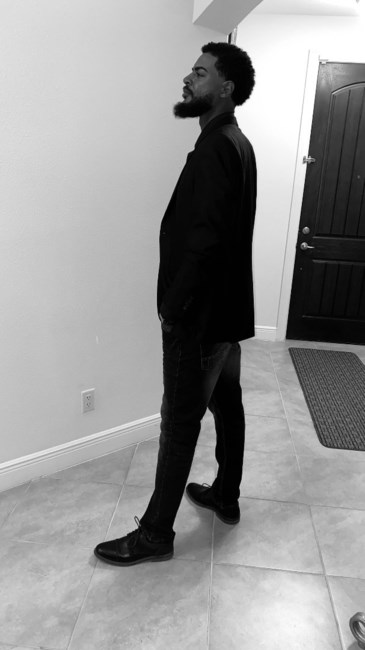 Our beloved Robert “RJ” Lenard Adams, Jr. affectionately known as a “mighty man of valor” by his mother died tragically, but courageously on September 18, 2022, at the age of 28 protecting those he loved, his beautiful mother and precious children, Faith Adams (6 years old) and Jeremiah Adams (5 years old). Robert was born on May 13, 1994, at Joe DiMaggio Children's Hospital, in Hollywood, Florida. Robert graduated from Olympia High School in 2012. Like Joshua in the Bible, Robert was a fighter and a possessor of the promises of God. Robert rededicated his life to Christ. We thank him for being an amazing dad and leaving us his two beautiful angels. Let us all keep in mind that the LORD our God is [the only] God. He is a faithful God, who keeps his promise and is merciful to thousands of generations of those who love him and obey his commands. Robert's occupations included construction, real estate, landscaping, sales, and teaching. Robert was a daredevil and loved extreme sports, boxing, go-cart and ATV riding, wrestling, muscle, drag racing, stock cars, traveling, and weight lifting. Robert will forever be a hero to his wife Yelitza Ruiz-Adams, children, Faith Adams, Jeremiah Adams, and mother Marsha Ebanks, aunt Andreen Ebanks, cousin Amari Stewart, grandfather Clement Ebanks, and great grandmother Louise Ebanks. He is also survived by father Robert Leonard Adams Sr (Antonesia), by brothers, Jayden Adams and Rylan Adams. Uncle Linden Adams(Miesha) Aunts Robin Adams, Tretisha Adams and Michelle Wong. Grandmother Linda Reaves Adams. He will also be missed by family, friends, and co-workers. RJ preceded in death by grandfather Robert Earl Adams, grandmother, Marlene Hutchinson and Aunt, Sonja Ebanks. A visitation for RJ will be held Monday, September 26, 2022 from 1:30 PM to 3:00 PM at Baldwin-Fairchild Altamonte, 994 E Altamonte Dr, Altamonte Springs, Florida 32701. Following the visitation will be a funeral service from 4:00 PM to 6:00 PM at City of Destiny, 505 East McCormick Road, Apopka, FL 32703. Dearly beloved, avenge not yourselves, but rather give place unto wrath; for it is written, Vengeance is mine; I will repay, saith the Lord. - Romans 12:19
See more See Less