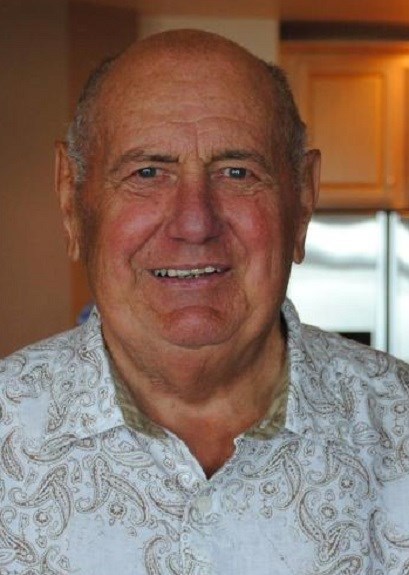 William Joseph Buchholz (Bill) passed away peacefully on September 15, 2022, in Longwood, Florida at the age of 88. He leaves behind his loving wife of 66 years, Mary Ellen; his three sons Daniel (Joan), Thomas (Mara) and John (Petra); and his grandchildren, Alex (Eleanor), Erin, Kelli and Joshua Buchholz. Bill and Mary Ellen moved to Village on the Green in September 2013 to be near their son, Dr. Daniel Buchholz. They enjoyed the community and the many friends and staff members who have enriched their lives. Prior to his illness, Bill was very involved with the VOTG sports programs and the programs for veterans. Bill was born in Berlin, WI on January 19, 1934, and lived in Berlin throughout his childhood. He was an active, engaged student participating in academics, athletics, and the band. He and Mary Ellen started dating after his junior year of high school. They graduated together in 1952. Bill attended the University of Wisconsin at Madison. After 2 years in Madison, he put his education on hold to serve an active-duty soldier with the US Army in Germany. After returning from Europe, he married Mary Ellen and returned to University of Wisconsin to earn degrees in both Mechanical Engineering and Business. Bill had a long career in the food industry. He started with Pillsbury in Springfield, Illinois and subsequently moved to Louisville, Ky, Grand Forks, ND, and Minneapolis, MN. He then began a career with General Foods (GF) International in Sao Paulo Brazil where he and his family lived for 3 years. Bill subsequently transferred to the Birds Eye division of GF and he and his family moved from Connecticut to Walla Walla, WA and then to Fulton, NY. Bill completed his GF career at GF headquarters in Rye, NY. After leaving GF, Bill and Mary Ellen built their dream home in Hilton Head Island, SC with a look towards retirement. However, new professional opportunities in food consulting brought them back to Wisconsin where they re-established roots in their home state. Bill become an important contributor to the growth of Jeneil Biotech in Saukville, WI with a colleague and long-time friend. Bill was always deeply involved in his community and had a pragmatic, optimistic, and can-do attitude. He instilled these important virtues in his family and those around him. Bill’s funeral service will be in Berlin, WI and he will be buried in Green Lake Wisconsin.
See more See Less

In Memory Of William Joseph Buchholz