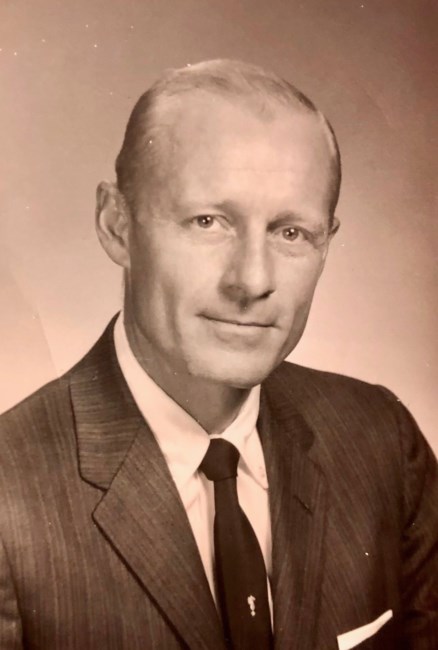 Clarence George Coble, 93, of Amarillo passed away August 2, 2022. Services will be held at 10:00 am, Friday, August 5, 2022 at Memorial Park Funeral Home, 6969 I-40 East. Clarence was born on September 29, 1928 in Clayton, NM to Jesse and Verna Coble. His family moved to Amarillo when he three of four years old. He went on to attend Amarillo High School until he joined the Navy at 16 years old. While in the Navy, he was in the South Pacific on the USS Tortuga during World War II. After serving in the Navy, he returned to Amarillo and married his high school sweetheart, Martha Jane Wortham on February 3, 1948. He worked for several years selling cars at Plains Chevrolet, and he then became an owner of several businesses including, The Fisherman Sporting Goods on 10th Street, C. Coble Ford in Stratford, and then the love of trout fishing and the mountains led him to owning The Texan Courts in Platoro, CO from 1968-1982. In retirement, he managed the T.O. Ranch in Raton, NM to doing carpentry. Clarence was a true ”Jack of all Trades.” He is survived by his wife, Martha; two daughters, Marka Heard, and Deena Hyer; a son, Matt Coble and Renee Hager Coble; nephew, Mark Evans; five cherished grandchildren, Amanda Stanford and husband Ricky, Jamie Plumlee and husband Larry, Ryan Coble and wife Annie, Courtney Box and husband Randy, and Landry Coble, Alexis Plumlee, Corban Plumlee, Kayla Plumlee Davis, Michael Plumlee, eight great-grandchildren, Brayden Stanford and wife Emily, Bryce Stanford and wife Aurora, Brody Stanford, Kinsler Box, Kaden Box, and Emmie Coble; and two great-great grandchildren. He was preceded in death by his parents, a brother, Joe Bob Coble, a sister, Betty Coble Evans, two son-in-laws, Tommy Heard, and Larry Hyer, and a great-grandchild, Abigail Neely.
See more See Less

In Memory Of Clarence Coble