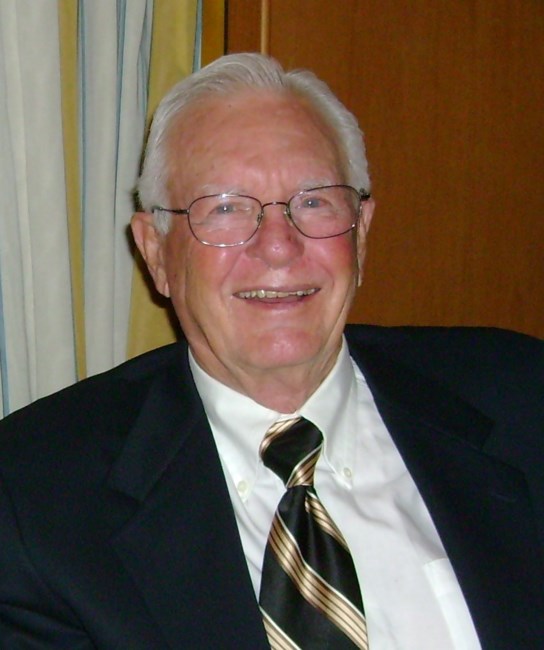 Jimmy Leon Carter, 95, entered heaven’s gates Saturday, September 17, 2022, with family by his side. He walked tall with and for God and was always a faithful and loving son, husband, and father. Jimmy was born to Ethel and Winston Carter on February 3, 1927, in Amarillo, Texas. Jimmy enlisted in the military immediately following high school and was inducted into the United States Army on June 6, 1945, as a tank crewman in Company A, 1st Battalion. He had it on good authority that he would be sent to the Pacific. WWII ended prior to Jimmy’s honorable discharge from military service. Jimmy was then off to Amarillo College where he met a young redhead, Lindalie Mock. Jimmy was committed to going to North Texas State but soon followed Lindalie to The University of New Mexico where he graduated with a Bachelor’s degree in accounting. He married Lindalie on September 2, 1950. Together, Lindalie and Jimmy built a life firmly rooted in the Christian faith and their unceasing love for Christ and family. A son and a daughter soon followed; he found himself a very engaged father, coaching the Cinch Bugs little league team, mowing the lawn, engaged in growing into his job with his lifelong employer Diamond Shamrock Corporation. Jimmy studied in the evenings and to earn his CPA designation before his youngest was in first grade. He soon became head of the tax department. He enjoyed the civic volunteerism encouraged by corporate America and found himself active in United Way, spearheading Diamond Shamrock’s fundraising efforts. He also enjoyed field examinations in Columbia, South America during Diamond Shamrock’s acquisition of offshore companies. Jimmy retired to care for his infirmed wife, Lindalie. During the 14 years as Lindalie’s loving and selfless caretaker, Jimmy earned the moniker “St. James”. Several years after Lindalie passed, God blessed him with his sweet wife LaRue Standefer. They married on June 1, 2002 and enjoyed many years of travel, playing bridge with friends, and enjoying the view from her cabin at Sunday Canyon. Jimmy was preceded in death by his parents Winston and Ethel Carter, wife Lindalie, and brother Bill Carter. Surviving family includes his wife, LaRue Carter, daughter Cheri Rubenstein of San Antonio, son Kit Carter and wife Beverly of Amarillo, granddaughter Sarah Jacobson and husband Elliot of New York, grandson Reece Carter and wife Elizabeth of Amarillo, granddaughter Jamie Dodson and husband Jacob of Amarillo, seven great grandchildren, and his brother Curtis Carter and many favorite nieces and nephews. The three brothers enjoyed participating together in an Honor Flight to Washington D.C. He was proud, but also humbled, to be part of the Greatest Generation. Jimmy became a deacon at First Baptist Church, a discussion leader for Bible Study Fellowship, and drove a church van taking foreign refugees to English language classes. His hobbies included handball, snow skiing, and golf with three lifetime holes-in-one. The family feels incredibly blessed to have had Jimmy’s gentle guidance and fine example for so long. There is great joy in contemplating Jesus saying “welcome good and faithful servant”. A visitation for Jimmy will be held Tuesday, September 20, 2022 from 5:00 PM to 8:00 PM at Griggs Schooler Gordon Funeral Directors, 5400 Bel St, Amarillo, Texas 79119. A graveside service will occur Wednesday, September 21, 2022 at 10:00 AM at Llano Cemetery, 2900 S. Hayes St, Amarillo, TX 79103. A funeral service will occur Wednesday, September 21, 2022 at 11:00 AM at First Baptist Church, 1208 S Tyler St, Amarillo, Texas 79101. Serving as honorary pallbearers are Reece Carter, Elliot Jacobson, Jacob Dodson, Mike Standefer, Edward Morris, James Wester, Patrick Carter, Jonathan Standefer, Michael Standefer, Richard Brown, Winn Carter and Sam Bass. Fond memories and expressions of sympathy may be shared at www.griggsschoolergordon.com for the Carter family.
See more See Less

In Memory Of Jimmy Leon Carter