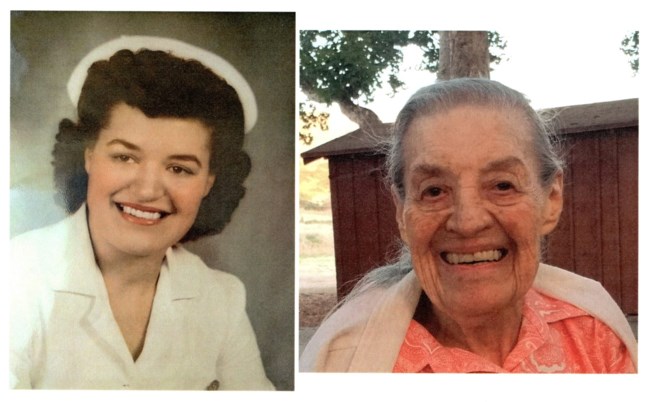 Clarice Florence Swanson also known as “Swanny” and “Mimi” to those closest to her, passed away on Sunday, October 11, 2020 She was born in Green Bay, Wisconsin on November 30, 1926. Clarice and her twin brother Clem were the oldest of eight children born to Florence and Clement Wirtz. She graduated from Catholic high school and went on to nursing college as a WWII Army Cadet Nurse to complete her RN. Clarice married Bill Swanson in 1949 and started her family the next year. They moved with their four children from Green Bay, WI to Anaheim, CA in January of 1965 for the sunshine. She enjoyed being able to walk to church, pick oranges in her backyard and watch the Disneyland fireworks from her front yard. Clarice worked at Martin Luther Hospital in Anaheim until she retired at age 67. She met so many people along the way who became her lifelong friends. Clarice had a best friend and next door neighbor of 55 years, Geri Gutierrez. She cherished all of the friendships she had and shared her love with her abundance of nieces and nephews as if they were her own children. Clarice and Bill opened their home to anyone who needed a place to stay. Clarice is preceded in death by her husband, William Swanson, parents Florence and Clement Wirtz, twin brother Clem Wirtz, and younger brother Robert Wirtz. She is survived by her brothers Ed Wirtz and Steve Wirtz, sisters Carol Valentine, Donna Paige and Judy Kellner. She is also survived by her four children Don Swanson (Wendy), Bill Swanson, Polly Hendrickson (Dave) and Nancy Kennedy (Jim). She was “Mimi” to six amazing grandchildren, one great grandson and soon to welcome a second great grandchild. Lindsay Kennedy- Aguilera (Vinnie), Christopher Hendrickson, Chad Kennedy, Cody Kennedy, Emily Swanson, Brandon Hendrickson and little Jacob Swanson. She set the bar really high with her life long service to others. That is her legacy. Hopefully we can also find the good in others as she did every day of her life. A funeral Mass will be held on Wednesday, October 21, 2020 at 12 noon. St. Justin Martyr Catholic Church 2050 W. Ball Road Anaheim, CA 92804 There will be a private family burial at Holy Sepulcher Cemetery in Orange, CA In lieu of flowers, please do something kind for someone in need. That’s what she would want. Fond memories and expressions of sympathy may be shared at www.funerariadelangelanaheim.com for the Swanson family.
See more See Less

In Memory Of Clarice Florence Swanson