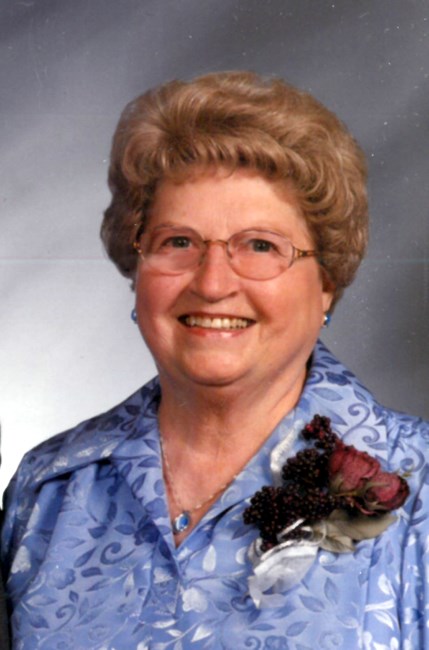 Bonnie Sue Ballard, 96, passed away on September 15, 2022, at Sunny View in Ankeny, Iowa. A visitation will be held at Ankeny Funeral Home from 2 - 4 p.m. on Sunday, September 25, with a service at 4 p.m. Burial will take place the next day at 10 a.m. on September 26th at the Highland Memory Gardens Cemetery in Des Moines. Bonnie was born February 20, 1926, in Ankeny to parents Charles and Anna Campbell, in a home built by her father across from Parkview School. She graduated from Ankeny High School in 1943. During her high school years, she played the snare drum in the band, which included the band marching in the Drake Relays parade. Bonnie also did part-time work as a babysitter and a waitress at Goodner’s Café. Her favorite activities were playing the piano, roller-skating, and bicycle riding. After her high school graduation, Bonnie worked at Hopkins Sporting Goods and was later a clerk for 5 years in the Polk County Auditor’s Office. On January 26, 1946, she was united in marriage to Orville Ballard. The couple moved to Ames, where Bonnie was Vice President at O.A. Ballard Excavating Corporation. In 1963 Bonnie and Orville built the Riverside Manor nursing home in Ames. A couple of years later in 1965 she graduated from the Ames School of Practical Nursing and was a Licensed Practical Nurse for many years. Then in 1970 Bonnie and Orville passed the Iowa State Board Test for Nursing Homes Administrators and were licensed for several years. During this same year, she completed the Dale Carnegie Course, and in 1985 the Dale Carnegie Management Seminar. Bonnie also served as a Notary Public. She was the Director of Nursing at Northcrest Retirement Community Health Center in Ames. They moved to the Saylorville Lake area and Bonnie served as administrator of Ankeny Sunny View Care Center for 16 years and helped for a short while in the opening of Mill Pond Campus. She served as a volunteer throughout her active life, including as a Sunday School Superintendent, class teacher, chair of funeral luncheons, co-chair of Harvest Home Dinners, and preparing food for many organizations such as Habitat for Humanity. Bonnie also served as president of American Legion Auxiliary Post 42, president of National T.T.T. Society, on the board of directors for the Iowa Nursing Home Association, State President of the Iowa Federation of LPNs, and in the Ankeny Chamber of Commerce. Her other memberships include the Terrace Hill Society, Ankeny Community Theater, the Altrusa Club of Ames and was a long-time charter member and past president of the Ankeny Area Historical Society and a member of the Executive Board. Bonnie’s hobbies were playing the organ, playing cards, cooking, and spending time with her family, which included cruises and trips to Minnesota. She owned a parking lot near ISU and the family parks cars at ISU home football games on her property near the stadium, and during October they would have a “Haunted Forest.” This was a fun family affair! Bonnie is survived by 2 sons, Lynn (wife Debbie) and Lee (wife Linda) Ballard, both of Ankeny; 2 sisters, Marjorie Ann Chase and Marilyn Dennler, both of Ankeny; daughter-in-law, Phyllis Ballard of Newton; and several grandchildren, great-grandchildren, nieces, and nephews. She was preceded in death by her parents, husband Orville in 2008, son, Larry, brother, Charles, sister, Mildred, and grandson, Tim. Memorials may be directed to the Ankeny United Church of Christ or the Ankeny Area Historical Society.
See more See Less

In Memory Of Bonnie Sue Ballard