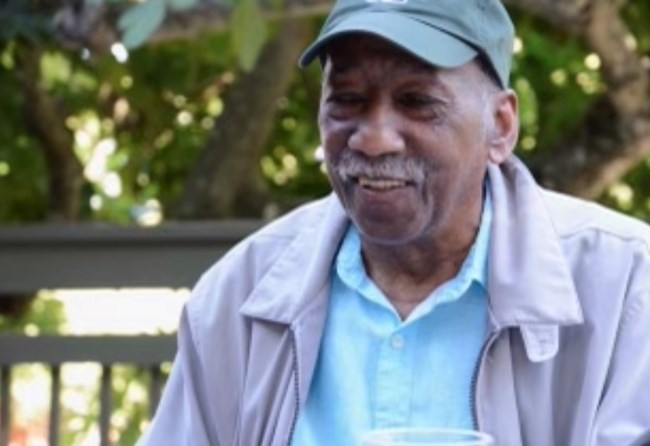 Daniel “Web” Webster Kirksey. Web was born in Saginaw, Michigan on Dec. 3, 1933, the only child of Daniel and Cora Kirksey. He died at his longtime Ann Arbor home surrounded by love and music under the care of Arbor Hospice on September 18, 2022. He was a star basketball player at Saginaw High School, class of 1951. His team won the state championship that year and he was named to the all-state team. Web was retroactively named Mr. Basketball for that year. He played basketball at Michigan Normal, now Eastern Michigan University where he excelled on the court and maintained a scoring record for many years. Leaving before graduation he returned to finish his bachelor’s degree in special education in 1966. While finishing up his degree he coached the boys basketball team at Roosevelt High School, a teacher-training school affiliated with EMU. He continued coaching there until the school closed. He was inducted into the EMU Sports Hall of Fame in 1978 and the Saginaw Valley Sports Hall of Fame in 2003. After serving in the US Army from 1959-1961 Web played for one year with the Harlem Globetrotters. He then played several years for a Michigan based affiliate, The Harlem Satellites. He was a physical education teacher for 8 years at the Wayne County Child Development Center and at Maxey Boys Training School for 26 years. He played for many years on various Ann Arbor Recreation League basketball teams that often won the city championship. After he decided his playing days were behind him, he took up the practice of Tai Chi as first a student then a revered teacher in the tai chi community around Michigan and the San Francisco Bay Area, they became a second family. His love of music, especially jazz, was second only to his love of family. He was a collector; occasional DJ on a Detroit radio station and a longtime supporter of WEMU. At home and when traveling he could always find a jazz club. Poetry was an important part of Web’s life. He incorporated it into his tai chi classes and would begin each day by reading one of the works in his collection. A lover of almost every form of art Web and his family attended and supported museums and theaters and music venues in Ann Arbor and Detroit. A lover of the natural world he enjoyed camping all around our beautiful state, especially on Lake Michigan. He was a bird watcher and could identify most bird species that came to his feeders. He traveled with his wildflower book and liked identifying roadside varieties. With his family he enjoyed traveling around this country and Canada, especially to the national parks. He also traveled to various parts of Europe and north Africa with his family. Web and Betty met in 1966 at the Wayne County Child Development Center where they were both first-year teachers, they fell in love and remained together for over 55 years and were married for over 51. Their son, Chris, was his pride and joy, as was his son Gordy from an earlier marriage. They survive him along with beloved family and friends and friends who are like family. Cremation has taken place. A memorial gathering to celebrate Web’s long and lovely life will take place at a future date. Donations to either Arbor Hospice (arborhospice.org) or WEMU (https://www.wemu.org/ donate) in his memory would be most appreciated. Fond memories and expressions of sympathy may be shared at www.muehligannarbor.com for the Kirksey family.
See more See Less

In Memory Of Daniel Webster Kirksey