There will be two community gatherings to mourn Jim’s passing and reflect on his life and impact. 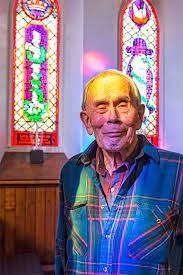 James Willis (“Jim”) Toy, pioneering Transgender/Bisexual/Lesbian/Gay rights and social justice advocate, organizer, therapist, and educator, passed away peacefully on the evening of January 1, 2022 at Hillside Terrace Senior Living in Ann Arbor at age 91. Born in New York City in 1930 to a Chinese American father and Scotch-Irish American mother, he grew up in rural Granville, Ohio experiencing anti-Asian discrimination, particularly during World War II. After receiving his bachelor’s degree in Music and French from Denison University in 1951, he taught English in France, was a conscientious objector who served in a hospital blood bank in New York City in lieu of military service, and then in 1957 became Organist and Director of Music for St. Joseph’s Episcopal Church in Detroit, where he became active in the civil rights movement. In 1960 he enrolled in the graduate program in musicology at the University of Michigan, where he achieved doctoral candidacy, but did not complete a dissertation. A lifelong violinist and singer with deep understanding and articulate appreciation for the arts, he was a regular attendee and generous supporter of performances presented by the University Musical Society in Ann Arbor and the Stratford Shakespeare Festival in Canada for over 60 years. In 1970, Jim became the first person known to have publicly come out as gay in the state of Michigan, while speaking at an anti-war rally in Detroit. A co-founder of both the Detroit and Ann Arbor Gay Liberation Fronts, he co-authored the first gay pride week proclamation by a government body in the U.S., issued by the Ann Arbor City Council in 1972. He co-founded the first TBLG center at an institution of higher education in the U.S., at the University of Michigan in 1971 (originally called the Human Sexuality Office, now known as the Spectrum Center), and co-led it until 1994. He was an early national leader in advocating for TBLG acceptance in the Episcopal Church--of which he was a lifelong member--and more broadly across faiths. He was a licensed social worker (receiving his MSW from U-M in 1981) who counseled, trained, and befriended thousands of people, many of whom credit him with positive transformation and even saving of their lives. A tireless and tenacious activist, Jim helped to foster the decades-long, ultimately successful effort to add sexual orientation and gender identity and expression to the University of Michigan’s non-discrimination protections. After helping to draft Ann Arbor’s landmark ordinance that prohibited discrimination based on sexual orientation in 1972, he continued to push for the next 27 years to add safeguards for the rights of transgender citizens, until the ordinance was finally revised to also include gender identity as a protected category in 1999. He helped to found and long served within many organizations and groups committed to social justice and community support, including the Michigan Organization for Human Rights (MOHR), now known as Equality Michigan; the Gay Youth Group (first LGBT support group for underage youth in Michigan); the first Michigan chapter of Parents and Friends of Lesbians and Gays (PFLAG); the Huron Valley HIV/AIDS Resource Center (HARC); the Out Loud Chorus; the Oasis TBLG Outreach Ministries of the Episcopal Diocese of Michigan; the Transgender Advocacy Project (TAP); the Inclusive Justice-Together in Faith coalition in Michigan; and the Washtenaw Rainbow Action Project (WRAP), which in 2010 was renamed the Jim Toy Community Center in his honor. For these and his many other contributions, he received multiple recognitions later in his life, including the National Association of Social Workers (NASW)-Michigan Lifetime Achievement Award in 2016, being installed as a Canon Honorary of the Episcopal Diocese of Michigan in 2019, and an honorary Doctorate of Humane Letters from the University of Michigan in 2021. In 2013, by proclamation of the Mayor and City Council, the City of Ann Arbor established April 29, his birthday, as Jim Toy Day. His legacy is preserved in the vast collection of his papers he left to U-M’s Bentley Historical Library. Preceded in death by his mother, Imogen Hamblen Toy, father James Toy, and stepmother Ruth Rickett Toy, Jim is survived by his half-siblings Nancy Ruth Young and David Henry Toy (Hazel) of Virginia; nieces Annette Homiller (Dan) of Georgia and Karen Downs of Virginia; grandnephews Samuel Homiller (Roo), James Homiller (Maggie), and Kenneth Downs; and grandniece Laura Downs. Other survivors include longtime dear friends Jim Kangas and John Alderman of Flint; Tom Nickey, Jay Aiken, Rick Krupinski, Scott Dennis and Jim Etzkorn, all of Ann Arbor; Michael Gowing of Pinckney; and so many more friends near and far. There will be two community gatherings to mourn Jim’s passing and reflect on his life and impact: An interfaith memorial service for Jim will be held on Thursday, May 19 at 7:00pm at First Presbyterian Church of Ann Arbor, 1432 Washtenaw Ave. The following evening, Friday, May 20 at 7:00pm, the University of Michigan will present the Jim Toy Celebration of Liberation at the Michigan Theater, 603 E. Liberty St., as part of the Spectrum Center’s 50th Anniversary Celebration weekend. All are welcome to attend both events. In lieu of flowers, donations may be made to the Jim Toy Community Center, Equality Michigan, Inclusive Justice, or any other organization promoting Jim’s passions: social justice, the arts, and education. For a tribute to Jim's life and work, please see: https://pridesource.com/article/gentlest-but-most-unshakeable-campaigner-jim-toy-michigan-lgbtq-trailblazer-and-icon-dies-at-91/
See more See Less

In Memory Of James Toy

University of Michigan will present the Jim Toy Celebration of Liberation at the Michigan Theater, 603 E. Liberty St., as part of the Spectrum Center’s 50th Anniversary Celebration weekend.