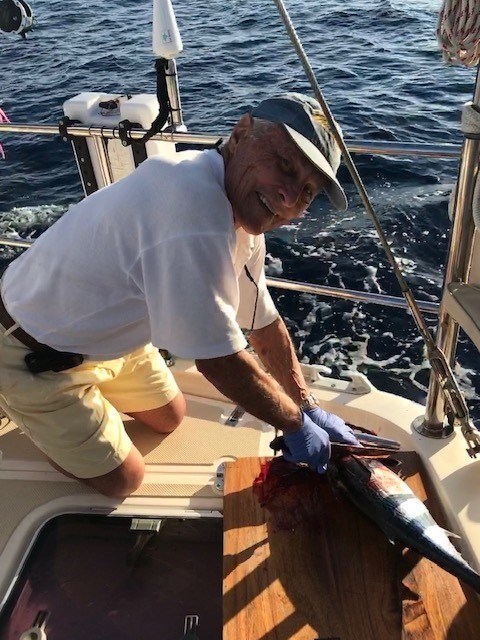 Charles Edward “ED” Hartman II On Saturday January 15, Ed died peacefully with his wife, Deb at his side. Ed had been diagnosed with cardio amyloidosis. Ed, named for his paternal grandfather, was born December 30, 1926 to Sada Marie Linthicum Hartman and Stanley Edward Hartman in Baltimore, Maryland. He attended McDonogh Military School in Baltimore, followed by Virginia Military Institute in Lexington, Virginia and graduated in the class of 1948B. Having been a hellion at McDonogh, Ed claimed VMI straightened him out in about 3 days. Ed loved his time at VMI; it gave him the structure and discipline he needed after losing his mother at age 11. Ed graduated in 3 years, with a degree in electrical engineering and graduated with honors as company commander. Having been initially rejected entrance into Harvard Law, Ed’s father, a Harvard grad himself, urged Ed to hop the train to Cambridge, MA to present his case for acceptance. It worked and Ed graduated, despite being told he likely wouldn’t make it. Ed graduated Harvard in 1950 as the youngest in his class. He joined his father’s law firm, Fell & Hartman in Baltimore. Although his responsibilities with this firm enabled Ed to see much of the country while representing a D.C. surety client, his love was sailing locally on the Bay. Indeed, his first sailboat was the Moth he sailed as a child in Bay Ridge. Ed eventually moved to Annapolis, living on his own small sailboat at Arnie Gay’s yacht yard on Spa Creek. In 1960 he hung his shingle in downtown Annapolis, opening his own law practice. Ed practiced “Door Law” referring to any case that came through the door. Early on, Ed made a name for himself by representing Historic Annapolis pro bono. In 1965, Ed’s best friend, Bennett Crain joined the firm, to become Hartman & Crain. Ed was a proficient litigator and was sought after for his strategic skills in insurance and banking law. Ed married Patricia McHenry in 1952, with whom he raised four children, 3 of which survive him, all of Annapolis: Debbie Gosselin, Carolyn Sutch and Ed Hartman III. Cathy, Ed’s 3rd daughter, died in a sailing accident; the vessel “Catherine Marie” is her namesake. He is survived by 6 grandchildren and seven great grandchildren along with his wife of 34 years, Deb. Ed’s true love was everything maritime. In 1977, Ed and Bennett Crain became partners in the Annapolis Boat Shows joining forces with Jerry Wood. With the passing of first Jerry and Kathy Wood, followed by Bennett, Ed became the sole owner of the Annapolis Boat Shows, which also included eastern shore and D.C. venues. In 2013, Ed sold the company. It was important to Ed to keep ownership local, thus they ended up in the hands of Paul Jacobs, the General Manager, Sheila Jones, a long-time senior sales executive, along with other local maritime entrepreneurs. Concurrent with being the managing partner of his law firm, Ed started Chesapeake Marine Tours, initially partnering with his friend and sailing buddy Bert Jabin. The company started with Annapolitan, making $8 day trips to St. Michaels. Then came Harbor Queen, Rebecca Forbush, Miss Anne I & II, water taxis named for grandchildren and numerous other vessels. In 1980, Ed bought Bert out. The fleet had expanded to 11 vessels upon the completion of ‘Catherine Marie’, the last vessel Ed & Deb built together. Upon her arrival to Annapolis Landing Marina, daughter Debbie made the decision to purchase the company in 1999. Continuing the juggle, Ed purchased a waterfront parcel on Back Creek in 1981 and began building Annapolis Landing Marina, opening in 1987. Additional parcels were added over a few years, becoming the boat storage and fuel dispensing operation it now is. Ed gave the marina to his children and retired at 93 in 2020. Ed was an original founder of the Annapolis Summer Garden Theatre. He also worked gratis for Historic Annapolis early in his law career and in the SAVE ANNAPOLIS campaign to preserve the maritime heritage of Annapolis, allowing countless thousands to love Annapolis as he did. Ed’s happiest times were on his boats, mostly sail. He competed in the first Cape Town to Rio Race in 1971 and countless other sailing competitions on the Bay, to Newport, Bermuda and the Keys along with a 6 month trip throughout the Caribbean to South America with his beloved children on his favorite vessel “Saphaedra”, a 51’ Ketch designed by Aage Nielsen. Ed was a member of the Sailing Club of the Chesapeake, exposing his children early on to sailing, a past President of the Chesapeake Yacht Racing Assoc.,and in November 2021 received his 70 year pin as a member of the Annapolis Yacht Club. He was also a member of the Lauderdale Yacht Club in Ft. Lauderdale, FL and the Cullasaja Club in Highlands, NC. He continued to cruise up and down the ICW, one of his favorite pastimes into his 90’s, often with family crewing, no matter the vessel, under the name “M’am’selle.> Ed exuded high energy, focus and persistence. His influence on Annapolis, his family and friends will be felt for generations to come. Above all, no matter what, the man was a southern gentleman. A Celebration of Life with a Reception will be held at Spa Creek Galley (within the Activity Center of Annapolis Yacht Club) 314 Sixth Street Annapolis, Maryland 21403 on February 1, 2022 at 1:30 pm In lieu of flowers, donations may be made to either: The Annapolis Yacht Club Foundation in Ed's name to further the sport of sailing or The Polydefkis Amyloid Research Fund @Johns Hopkins. heatherculp@jhmi.edu
See more See Less

Celebration of Life with a Reception