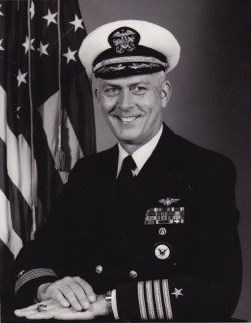 Retired Navy Captain Daniel Mack Truax died February 14, 2020 at home in Annapolis with his family by his side. Dan was the first of two sons born to Opal McCoy in Oklahoma City, OK on January 23,1936. He and his brother Dave were adopted by Hugh Garland (Gary) Truax after his marriage to Opal. Gary was a Navy pilot who instilled in Dan his dedication to the Navy and his love of flying. Dan graduated from W. B. Ray High School, Corpus Christi, TX and attended Texas A&M University and College of San Mateo, CA before entering the United States Naval Academy. He graduated and was commissioned in 1959. On graduation day he married Ona Marie Richardson and began their 60-plus year loving adventure together. He reported directly to flight school, earned his wings in 1960 in Corpus Christi and welcomed their son Timothy Michael. Dan’s first duty station was with VP 47, Oak Harbor, WA, flying the P5M Martin Marlin, an anti-submarine warfare seaplane. In 1963 twin daughters Christina Lee and Patricia Lynn were born. Dan would say his two most rewarding tours were as the ship’s meteorologist on the aircraft carrier USS Hancock and as Commanding Officer of Patrol Squadron 9 based at Moffett Field, Sunnyvale, CA. The Hancock deployed to the western Pacific during the Vietnam war. Dan qualified to fly the carrier onboard delivery (COD) two engine prop plane and logged more than 100 carrier landings. He also qualified as Officer on Deck Underway. As a land based pilot, he was unashamedly proud of those accomplishments. Under his command VP 9 deployed to Kadena, Okinawa and won the Arnold J. Isbell Award for excellence in antisubmarine warfare In the Pacific fleet. He also had tours as a navigation instructor with Training Squadron 29 in Corpus Christi and Department Head tour with VP 1, Barbers Point, HI. He felt in these assignments he was using all the technical and leadership skills instilled in him by his father and USNA. In addition to his Bachelor of Science degree from USNA, Dan earned a master’s degree in meteorology from the Naval Postgraduate School, Monterey, CA and was a graduate of the Armed Forces Staff College and the Naval War College. His penultimate duty assignment brought him to Annapolis where he was associate chairman of the Physics Department and then Assistant Dean for Faculty and Finance at the Naval Academy. During this time he and Ona started sponsoring midshipmen (too many to count) and did so for 30+ years. He retired from the Navy in 1983 after a tour with the Naval Recruiting Command, Arlington, VA. After a short and unremarkable career in real estate, Dan accepted a position with the Naval Academy Alumni Association as treasurer. There he found his true calling - dealing with numbers and supporting the institution he credited with the remarkable success he had in life. During his time at the Alumni Association, he wrote checks for construction of Alumni Hall, and the columbarium, hoping the fundraisers had made enough to cover the cost. The class of 1959 chose as their 50th gift to the academy, the building of the beautiful oratory at the columbarium. His final service will be held there with inurnment to follow. He retired from the Alumni Association in 1995 and continued his life-long love of travel, while also working part-time at the Maryland Legislature during sessions He and Ona visited Europe, the United Kingdom, Africa, Alaska, Russia, Mexico, Canada, and countless other destinations. This in addition to Japan, Thailand, Hong Kong, the Philippines, and other Asian locations during his service. He loved visiting his son, daughter-in-law, and grandsons in California, and his brother and sister-in-law, and his niece and nephew in Arizona. For a few years in the 2000’s, he and Ona relocated to Lewes, DE, but then returned to Annapolis, where they continued to welcome classmates, family, former Midshipmen they had sponsored, and countless friends in their home. Even as he was stricken with one health setback after another, Dan persevered. He never complained about his ailments, nor asked for your sympathy. He was always most interested in your life and always made sure to say “I love you” to all of his friends and family whenever they would visit or call. He was a quiet, gentle man who loved his God, loved his country, loved the Navy and USNA, loved his classmates and friends, but most of all loved his family. Capt. Truax is survived by his brother David Truax (Janet), his wife Ona, his son Tim (Susan), his daughters Christina Lindsay (ex-husband GP) and Tricia Bettick (Mike), and his grandchildren Daniel Truax, Jay Chellis, John Truax, Garrett Lindsay, Tim Chellis, Chris Chellis, Caroline Lindsay, David Truax, and Kate Lindsay. He also is survived by his “step” grandchildren Angela Barton (Aaron), Kaitlin Kertsman (Steve), Michael Bettick (Jessica), seven Bettick great-grandchildren, his nephew Gary Truax (JoAnn), his niece Tiffany Wilkins, and five great nieces. Services will be held at 10:30am on April 23 at the USNA Chapel. In lieu of flowers contributions may be made to Hospice of the Chesapeake or USNA Alumni Association (Class of 1959).
See more See Less

In Memory Of Daniel Mack Truax