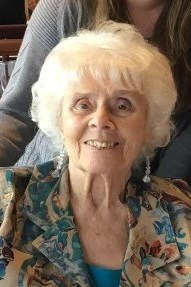 After a long and fulfilled life, Margaret (Peggy) Edelen Hopkins passed away peacefully on Wednesday, May 4th at her home in Annapolis at the age of 94. Peggy was born on September 14th, 1927 in Bryantown Maryland, daughter to Edward Joseph and Alma Mudd Edelen. She was the youngest of 7 siblings, with 2 brothers and 4 sisters. Peggy lived her youth on the family farm Brinkwood, in Charles County, living the iconic Southern Maryland life. She attended Saint Mary’s Elementary and High School, where she met the love of her life, Spencer Hopkins Sr, who was a varsity boxer and football player at Charlotte Hall Military School. She received her associates at St. Agnes in Baltimore and worked for a time for the State of Maryland. In 1951 she married Spencer Hopkins Sr. They moved to the neighborhood of Bay Ridge in Annapolis, Maryland where they spent the rest of their married life in various homes. In 1955 she became a mother and had her first son, Spencer Hopkins Jr. and had her second son in 1957, Franklin Hopkins. She raised her family boating crabbing, skiing, and fishing. She was an avid skier in her youth and entertained friends and neighbors on the beaches, porches, and boats of the Chesapeake Bay. She was a devout Catholic as she practiced her faith daily, attended church regularly, and always showed kindness, acceptance, and care for others. She supported her husband’s family business at Hopkins Furniture Company in Maryland and Virginia. It continued to be successful for many years and later became Hopkins Investment Company in the early 2000’s. She is preceded in death by her husband, Spencer in 2002 and son, Frank in 1995. She is survived by her son, Spencer Hopkins Jr (Julie) & her sons, Parker & Andy; granddaughter, Rebecca Carullo (Vince), great-granddaughter, Haleigh Hopkins, and dozens of nieces and nephews. Peggy’s family will miss her smile, kindness, and attendance at every family event. We know she is with God and in a better place. In lieu of flowers, contributions can be made to Samaritan House 2610 Greenbriar Lane, Annapolis, Maryland 21401, or Hospice of the Chesapeake, 90 Ritchie Hwy, Pasadena, MD 21122. The funeral will be held on June 23rd at 10:30am at St. John Neumann Church 620 N Bestgate Rd, Annapolis, MD 21401. A celebration of life will be held for family and friends following Mass.
See more See Less

In Memory Of Margaret Edelen Hopkins