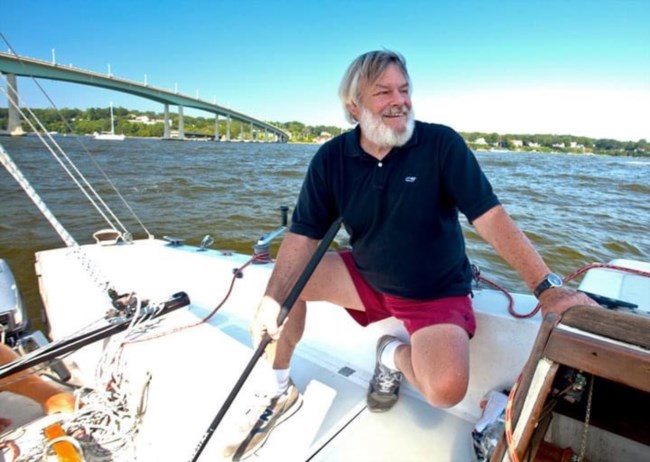 Tom Fluharty, 84 years of age, passed away on Monday, May 9th 2022 in the comfort of his home in Annapolis, Maryland. The family will receive friends at the John M. Taylor Funeral Home, 147 Duke of Gloucester Street Annapolis, MD 21401 on Tuesday, May 17, 2022 from 4 to 7 pm. A graveside service will be held on Wednesday, May 18, 2022 at 12 noon at Epworth Methodist Church Cemetery 163 Henlopen Ave, Rehoboth Beach, DE 19971. Tom was born on August 14, 1937 in Easton, MD to the late George and Maxine Fluharty. He was the oldest of 5 children. Tom grew up in Oxford, MD and was known in his youth as “Tick". He graduated from Easton High School and proceeded to have numerous careers during his life. He was a Veteran in the Navy and was stationed at Oceana Naval Air Station in Virginia where he served for 4 years. He grew up tonging for oysters and working on the waters of the Tred Avon, owned a business tuning organs at the local churches, and was a Pilot in Easton, MD where he did commuter flights from Easton to BWI or Washington, D.C. Tom owned Talbot Dental Lab where he made false teeth for local dentists. He owned and operated Grove Apartments in Rehoboth Beach, DE and he was the owner of Appalachian Log homes where he designed Log Cabins. Tom worked for Penn Mutual Insurance as an Insurance Adjuster for several years. Tom had several hobbies to include: Motorcycles, Model Airplanes and Boats, Sailing, Fishing, Skydiving, Scuba Diving, Banjo, Ukulele, Kayaking, Photography, Ham Radio, and Building Computers. Tom is survived by his wife Phyllis Ann Fluharty (nee Graham); children Marty Broerman and her husband Scott, Colin Fluharty and his wife Farrah, Justin Fluharty and his wife Krystal, D’Anna Farrell and her husband Will; and his siblings Timmy Fluharty and his wife Nancy, Carl Fluharty, Linda Davis and her husband Tom, and Barbara Houser. Tom was also a grandfather to eighteen grandchildren.
See more See Less

In Memory Of Thomas Leon Fluharty