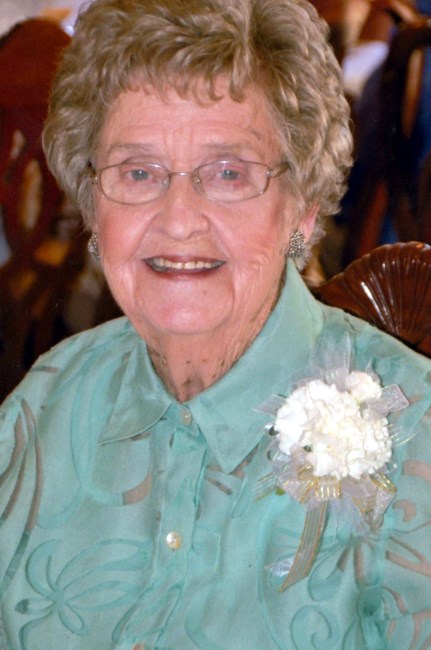 Funeral services for Edna “Christine” (Yates) Stubbs Carter will be held at Parker Memorial Baptist Church in Anniston on Monday, February 25, 2019 at 2:00 with Pastor Michael E. Yates, Dr. Mack Amis, and Bro. Dale Hollingsworth officiating. The family will receive friends from 12:00 until 2:00 in the church sanctuary. Burial will follow at Anniston Memorial Gardens. Mrs Carter passed away February 21, 2019 at her home.

Mrs. Carter was born February 5, 1922 in Calhoun County, Alabama. Christine’s earliest years were spent with her parents and siblings in Alabama. The family moved to Texas when Christine was approximately two and one half years old. They resided in Malone and Austin, Texas, were she was educated and grew up. Christine accepted Jesus Christ as her Lord and Savior and being a Baptist Christian, she often commented on going to church as a child. She loved music and gospel hymns. At nineteen years of age, Christine with her parents and siblings moved back to Alabama. She worked at several stores in Anniston. She met and married her first love Richard K, Stubbs I, who was serving in the United States Navy during WWII when she was twenty-two. Their first child, a son, was born three years later, and later two more sons were born. The family attended Northside Baptist Church. Life was special for them and time together until illness struck Christine’s husband, Richard. He was diagnosed with Hodgkin’s disease and passed away. With three son to raise, Christine, later married Jack Carter, and bore two more children, a son and a daughter. The family moved from Anniston to Saks. Christine and Jack ran the Ritz Café and Rooming House for many years and several service stations. They retired and enjoyed time together with family at their home in Spring Hill Heights. Mr. Carter passed away and Christine continued to enjoy life with her children, grandchildren and great grandchildren. She kept her unique laughter, her lunch friends, her church activities and Sunday School (Joy Class) at Parker Memorial Baptist Church.

Flowers will be accepted or donations may be made to Parker Memorial Baptist Church, 1205 Quintard Ave, Anniston, Al. 36207. Gray Brown Service in charge of arrangements.

In Memory Of Edna Christine Carter