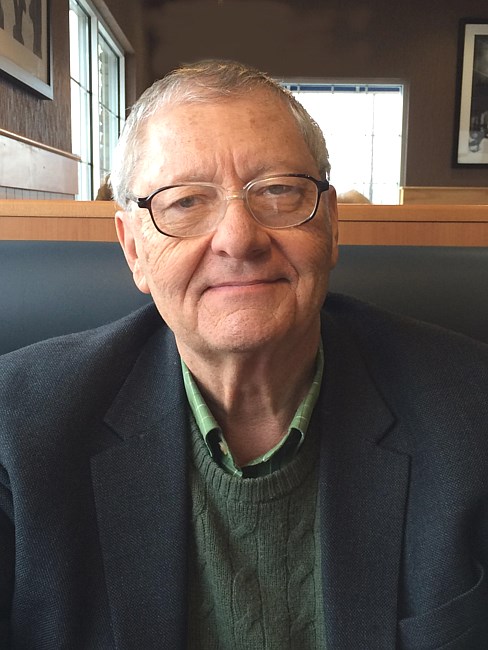 John Willard Northrup, 85, of Flint, Michigan, passed away peacefully, on July 14, 2020. John was born on August 2, 1934, in Sault Saint Marie, Michigan. He was the youngest of two children of Willard and Anna (Lagg) Northrup, who preceded him in death. His youth was spent on a farm in Grand Blanc, Michigan. He graduated from Grand Blanc Township Unit High School in 1952, received an Associate degree from Mott Community College, and a Bachelor of Arts from the University of Michigan, Flint. He married Lucy (Larson) Morrissey in 1982 and lived happily in the Mott Park area over 32 years, as a parishioner of St. John Vianney Church. John and Lucy Northrup spent many wonderful times gathering with family and friends at their cabin in Good Hart, Michigan. They also enjoyed traveling to many places around the world, including Ireland, Norway, most of Europe, Australia, and Israel. His passions included sharing his beautiful singing voice, love of dogs, being an avid reader, the gift of storytelling, and spending time with his grandchildren. John Northrup worked as an accountant at Flint Buick for 31 years. He believed in giving back to his city in service to others. He was dedicated to the City of Flint by serving for 26 years on the Flint City Council as President and Vice President of Council during his long tenure. John was the longest serving Councilperson in Flint history. During his service, John authored many initiatives that were adopted to protect and improve the quality of life for Flint residents. He continued his commitment of serving by presiding for 19 years as the 4th District County Commissioner on the Genesee County Board of Commissioners. During his tenure he served on Operations and Finance Committees, as a Board representative on the 9-1-1 Consortium, served as a Chairperson of the Mass Transit Authority, served on the Board of Health and Genesee County Retirement Commission. John was dedicated to his family, dearly loved and will be missed. He is survived by his sister Marilyn Noller, his sons, Jonathan Northrup (wife Margaret), and Sam Northrup, his stepchildren, Mary Nordstrom (husband Paul), Martha Morrissey, John Morrissey (wife Laura), Jim Morrissey (wife Amy) and Anne Rainis (husband John). He had 17 grandchildren and 5 great-grandchildren. He was preceded in death by his wife Lucy Northrup, his daughter Jenny Austin and his first wife of 20 years Josephine (Cummings) Northrup. Due to the Covid-19 gathering restrictions, a Memorial Service is not planned at this time. Remembrance donations may be made to Season’s Hospice and Palliative Care Foundation, 6400 Shafer Court, Rosemont, IL 60018 or https://seasonsfoundation.org
See more See Less

In Memory Of John W. Northrup