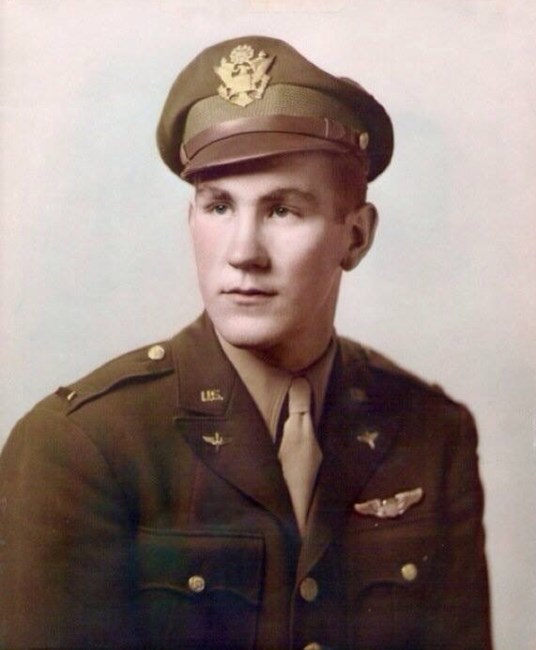 Robert W. “Bob” Hartman, 97 of Leawood, KS, formerly of Palatine and Arlington Heights, IL passed away August 6, 2022. Bob was born September 20, 1924, in Muskegon, MI to William and Esther (Lindquist) Hartman. He was the beloved husband of the late Laura M. Hartman; loving father of Kathleen (Tim) Coniglio, Phyllis Hartman (Herb Briick), Mark (Lisa) Hartman and Barbara (Jed) Shea; cherished grandfather of Kara (Ezequiel Portillo) Coniglio, Lauren (Robert) Holden, Mark (Shannon) Coniglio, Emily (Michael) Dandurand, Rachael (Jordan) Blinn, Samantha (Scott) Prince, Michael Shea (Ashley Mosley), Matthew Hartman (Maggie Given), Nick Hartman (Maggie Berusch) and Corrine Shea (William Lendof) and great-grandfather of 8 plus 2 on the way. Bob is survived by his sister Barbara Hartman Clark of Muskegon, MI. Bob grew up in Muskegon, MI and in his early years lived on Mann Street with his parents, Esther, and William Hartman and his four sisters (Winifred, Edith, Audrey, and Barbara). A child of the great depression, early in life Bob learned the value of hard work. Starting at age 11, he ran a paper route, delivering papers on his bicycle no matter the weather. He was a committed boy scout, achieving Eagle Scout status. In 1942, upon turning 18, Bob enlisted in the Army Air Corp and served as a B-24 Liberator pilot in the Pacific Theatre (Philippines, Morotai Island, Papua New Guinea) during World War II, attaining the rank of First Lieutenant. At the end of the war, he returned to his hometown, reconnected with, and married his lifelong love, Laura Holdeman. Utilizing the GI Bill, Bob applied and was accepted at Northwestern University, where he graduated with a degree in business. His entire career was spent in the insurance industry as an insurance broker and became the president and CEO of Bayly, Martin and Fay Insurance Brokerage in Chicago, IL. After a long and fulfilling career, Bob retired in 1991. While these facts portray a loving husband, father, grandfather, brother son and friend, Bob was so much more. He was a man that represented the greatest generation-an icon and legend to all that knew and loved him. Deeply intelligent, kind, honest, generous; committed to family, friends, and country. To the end he retained his sense of humor and treated each person that he encountered with kindness and respect. While we were blessed to have so many years with him, his presence will be deeply missed by all who were fortunate to have known him. Visitation will be Monday, August 15, 2022, from 9:00 AM until the time of the Funeral Service at 10:30AM at Lauterburg & Oehler Funeral Home, 2000 E. Northwest Highway, Arlington Heights. Interment will follow at Memory Gardens Cemetery. Funeral info 847-253-5423 or www.lauterburgoehler.com. In lieu of flowers, the family requests a donation to the Fisher Center for Alzheimer’s Research Foundation. Contact information: http://www.alzinfo.org FDR Station, PO Box 220 New York, NY 10150 800-259-4636
See more See Less