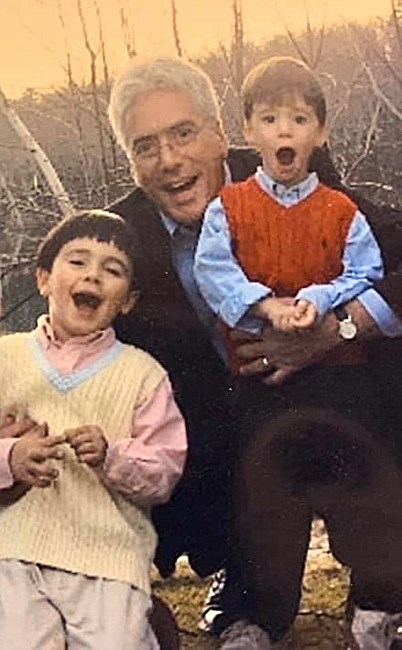 Gone much too soon, Bartley (Bart) Reynolds passed away on December 11, 2022, at the age of 66. He was the life of the party, adored by all he met, treasured by his friends and family, a great storyteller and an immensely loved father and husband. Bart was born in Washington, DC and was a lifelong resident of Arlington, Virginia. He graduated from Yorktown High School and went on to attend Virginia Tech. He worked in the family business, Reynolds Brothers, building homes across Northern Virginia and spent the past 30 years working with his brother Chris as a realtor/broker at City and Suburban Homes. Bart and his future wife, Leslie, met on a blind date in 1993, a match made by her manicurist who met Bart in a bar. Not one to be rushed, it took quite some time for Bart to propose. They married in 1998 in Saratoga Springs, NY and lived on Lake George, NY after their honeymoon. He in his mid-forties and she in her mid-thirties, they had their first son Zach, born in 1999. The family moved back to Arlington, VA to settle down, and their son Will was born in 2001. He loved watching his boys play sports and was always the most vocal fan at their games. Sadly, he and Leslie were escorted out of a second-grade basketball game by a referee for one particularly passionate outburst. There was nothing he loved more than spending time with his family including trips to the Outer Banks, New York City to watch the Knicks and the Yankees, weekends at Auburn, NFL games, Nationals’ games, gatherings in Upstate New York with extended family and get-togethers at his sister Sherry’s for special occasions. Bart fell down the stairs in October 2021 and suffered a Traumatic Brain Injury. He spent months in hospitals and rehab facilities and there were moments, even days, of the old Bart. Sadly, those were not lasting, and he spent his final months at home in the care of his wife, sons, and home aides. He was so fortunate to have many good friends and family who were frequent visitors, generous with both their time and their cooking skills. Bart was pre-deceased by his parents, Walter and Sherry Reynolds of Arlington, and his infant brother Scott. He was also pre-deceased by his in-laws, Margaret and William Donohue. Left to cherish and treasure Bart’s memory are his wife, Leslie Reynolds and his son Zachary of Arlington, VA, and his son Lance Corporal William Reynolds of Camp Lejeune, NC. He is also survived by his sister Sherry (Christopher) Crittenden, his brother Richardson (Abby) Reynolds, his sister Tierney (Kenneth) Bates, his brother Christopher (Neide) Reynolds, all of Arlington and his sister Valeen (Chip) Giannettino of Burlington, IA. His brothers-in-law Jeffrey Donohue of Saratoga Springs, NY and Keith (Kelly) Donohue of South Glens Falls, NY, along with many beloved nieces and nephews and extended family members. A funeral service will be held on Tuesday, December 20 at 11:00 AM at St. Mary’s Episcopal Church, 2609 North Glebe Road, Arlington, VA 22207 with the Rev. Andrew T.P. Merrow, Rector, officiating. Visitation will be from 10:00 AM – 10:45 AM in the chapel of church. In lieu of flowers, donations in Bart’s memory can be made to St. Mary’s Arlington or the Brain Injury Association of America.
See more See Less

In Memory Of Bartley Burton Reynolds