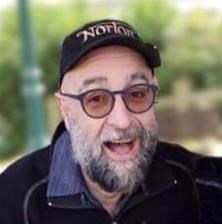 Farrokh Jahandari, 56, was an energetic, curious, and loyal husband and father who lost his battle with depression on June 3, 2020. Born in Tehran, Iran to Kavoos and Mahin Jahandari, he was quickly renamed Dadashee by his sister Leili upon arrival home from the hospital. The endearing name – Farsi for little brother – was used by close family and friends throughout his life. Farrokh was forever a community builder, inquisitive to learn about others while welcoming them into his circle and bringing them together. Those in Arlington, where he called home for many years, knew him as the unofficial “Mayor of Clarendon.” People who only met Farrokh once or twice often fondly remember the details of the encounter – even years later. He had many passions in life among them were traveling, music, skiing, riding his motorcycle down winding country roads – fully experiencing the outdoors in every way. Farrokh valued conversations about politics, world affairs and general curiosities of life. His gregarious magnetism, and quick-witted personality were infectious, as was the smile he so often wore with genuine good humor and joy. Having contended with mental health issues throughout his adult life, Farrokh understood the value of therapy and often counseled friends who needed help. He researched mental health issues in great depth for himself and others, tried new treatments when they became available, and was open to sharing his experiences, successes and challenges with those in need. He is preceded in death by his father, Kavoos. Survivors include wife Rebecca, daughter Leyli, his mother Mahin, and sister Leili. A tribute to his life will be announced at a later date.
See more See Less

In Memory Of Farrokh Jahandari