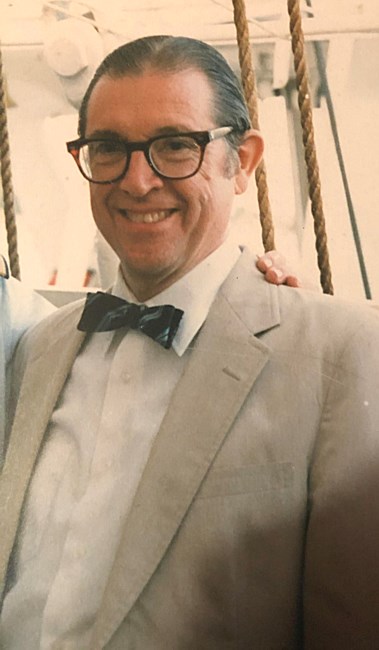 Frontis Burbank (Wig) Wiggins, Jr., retired Foreign Service Officer and internationally recognized Bing Crosby expert, died on October 29, 2019, at his home in Arlington, Virginia at the age of 90. He was born in Thomasville, Georgia, on April 7, 1929 to Frontis Burbank and Emma Louise (King) Wiggins and grew up in Albany, Georgia, where his father owned a small business. After earning an Industrial Engineering degree from Georgia Tech (1950), he attended the University of Birmingham, England, on a Rotary Club scholarship, leaving in 1951 with a Graduate Commerce (MBA) degree plus lifelong friendships with fellow students and a permanent disgust for Brussels sprouts. While working for Standard Oil in Baton Rouge in 1952, he was called to naval service. After the Korean War he entered the University of California at Berkeley on the GI Bill, earning a 1956 Master of Political Science for his thesis on the election dispute that in 1946 briefly left Georgia with 3 simultaneous governors. He entered the Foreign Service in 1956 and served his country at home and abroad for nearly 35 years. His first posts were Kenya and Guatemala, followed by Indonesia, where in 1960 he married an Embassy colleague, Laura Ponnone of Farmington, Connecticut, and where their daughter Joanne was born. His next post, Italy, was the birthplace of his son, Frontis Burbank III. His next overseas appointment was Deputy Chief of Mission (and frequent Chargé d’Affaires) for Malta. After serving on, then heading, the Board of Examiners (which selects new Foreign Service officers), his final post was U.S. Consul for Brisbane, Australia. He retired in 1991. He loved music of all kinds, from Hot Jazz and the Weavers to opera and Broadway, but his favorite by far was Bing Crosby. He was a serious collector, serving for decades as the American Representative for the International Club Crosby. He developed enduring friendships with Bing enthusiasts all over the world and contributed to the preservation of Crosby’s musical legacy. His encouragement sustained John McNicholas’ mission to issue all Bing’s recordings via the Chronological Bing Crosby, AKA the Jonzo Series. In 2015, he and co-author Jim Reilly published “The Definitive Bing Crosby Discography: From 78s to CDs.” He was invited by MCA records to edit a series of re-issues of Bing’ recordings, and he selected the music for over a dozen CDs featuring Bing’s wide range, including 21 gold records, Hawaiian, Irish, and Western songs, and of course Christmas music, the genre Bing pioneered. He was also closely involved with Hofstra University’s 2002 “Bing! Crosby and American Culture” conference. He lost his wife Laura in 2007 after 47 years of devoted partnership. He is survived by his brother, James Marvin (Adele Cooke), of Glen Eden Beach, Oregon, his daughter, Joanne (Shelley Platt), of Richmond, and his son, Frontis Burbank III, and grandson, Frontis Burbank (Primo) IV, of Fairfax.
See more See Less