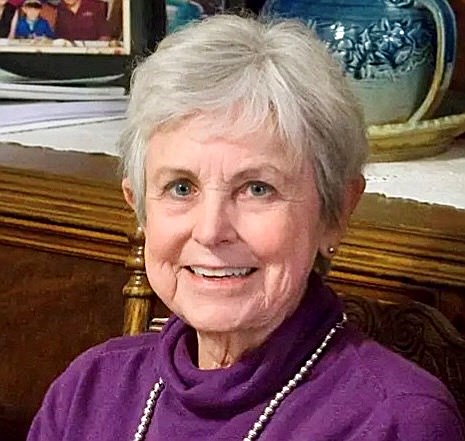 Marjorie Gray Duke, 82, passed away peacefully Sunday, July 31, 2022 in Annandale, VA. Born July 28, 1940 in Snow Hill, NC, the oldest child of Parrott and Julia Inez Gray’s six children, Marjorie learned the importance of hard work and devotion to family while living in a three room farmhouse and working the fields. Upon moving to Kinston, NC, she participated in athletic activities, played the piano, and was High School Homecoming Queen. Marjorie’s upbringing shaped her into the incredibly pure and selfless woman we all knew and dearly loved. Following high school, Marjorie moved to Washington, DC, where she attended George Washington University while working for the Federal Reserve. There, she met her husband of 58 years, James Duke. They were married in 1964. Marjorie and Jim settled in Virginia Beach, VA, built a home in the North End, and raised five children. As a mother and spouse, she was the epitome of unconditional love. After being a stay-at-home Mom for 25-years, Marjorie embarked on a new career as a travel agent. Fate led her to visit southern Africa which launched her into a specialization in African safaris. Marjorie’s career gave her immense satisfaction, and she became an expert at planning tours that explored the African continent. Marjorie is survived by her five children: James Duke Jr., Stephanie Penner, her husband Alan, Michael Duke, his wife Ginger, Daniel Duke, his wife Elizabeth, Christopher Duke, eleven grandchildren, and five brothers and sisters. Marjorie Duke lived a life of optimism, strength, and devotion to faith and family. Her unconditional love carried her on the journey to eternal life.
See more See Less

In Memory Of Marjorie Gray Duke