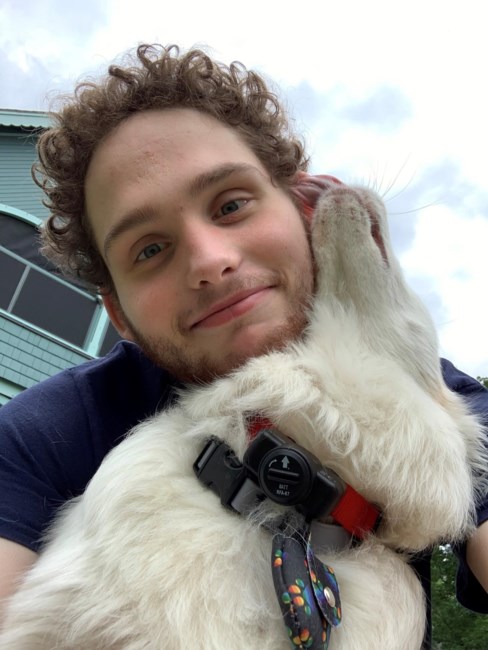 Michael Gerard Lawrence Cannon, age 23, of Arlington, Virginia died at his home on Sunday, January 15, 2023 due to complications from a seizure. Michael was born December 17, 1999 at Columbia Hospital for Women in Washington, DC. He was a fighter from the very beginning, overcoming a premature birth at 30 weeks and a diagnosis of hydrocephalus, which later arrested, before he even came home from the hospital. He might have come home earlier if he had not constantly tried to pull out the breathing tubes inflating his lungs. After he did come home, he kept his family on high alert by setting off his breathing monitor on a regular basis by forgetting to breathe. As he grew, he delighted his parents and brothers with his cheerful demeanor, his loving heart, and his desire for justice. He never passed someone in need of money that he did not help. Later, when he worked at Wendy’s, he had to be stopped from paying for his customer’s orders when they couldn’t pay. Mikey went to preschool at Trinity Presbyterian, Pre-K and Kindergarten at St. Agnes, and later was homeschooled and went to Nottingham Elementary. He found lifelong friends at every turn. Of course, for Mikey, everyone was a friend. His acting career was launched by Mrs. Brown of the St. Agnes Brown Bears who cast him as Joseph in the Nativity play and continued throughout his high school years. He found his home at The Heights beginning in 6th grade through his graduation in 2019. It is not an exaggeration to say that the Heights formed him into the man he became. He strove to be a “Heights man” and succeeded. His teachers showed him unfailing patience and all his classmates became his friend. His association with the Heights was his proudest accomplishment. After graduation and a stint with College Learning Experience in Rockville, Maryland, Mikey returned to his home in Arlington and began working as a crew member at Wendy’s on Langston Boulevard. He worked there from October 2020 until his death. He got to know his customers and his coworkers and every day on his way to work he would tell his mom “I love my job.” The list of things Mikey loved could go on forever. Dogs, elderly people, and babies were at the top of the list. He especially loved his second home at Thousand Island Park, New York. He knew every dog that wandered the Island, but he loved his own dog, Rex, the most. Mikey is survived by his loving parents Mary and Frank Cannon, his brothers Daniel (Sarah) and Robert (Grace), his nephew Austin and niece Alyssa, and one more nephew on the way. He is also survived by his grandmothers, many aunts, uncles, cousins, and friends. In lieu of flowers, his family requests that donations be made in his memory to The Heights School, 10400 Seven Locks Road, Potomac, Maryland 20854. A visitation for Michael will be held Wednesday, January 18, 2023 from 6:00 PM to 8:00 PM at Murphy Funeral Homes, 4510 Wilson Boulevard, Arlington, VA 22203. A funeral service will occur Thursday, January 19, 2023 from 11:00 AM to 12:00 PM at St. Agnes Catholic Church, 1910 N. Randolph Street, Arlington, VA 22207. Fond memories and expressions of sympathy may be shared at www.murphy-funeralhomes.com for the Cannon family.
See more See Less

In Memory Of Michael Gerard Cannon