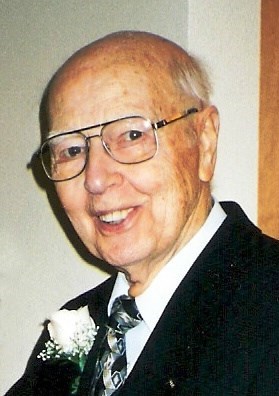 Andrew (Andy) Opsata left this earthly life and entered the Kingdom of God at the age of 94. He was born in Colgan, ND, the 6th and youngest child of Stephen and Tillie. The family later moved to Bremerton, where he grew up, and met and married Virginia Eder, his wife of 71 years. Most of his life, he worked as a grocer and meat cutter. In World War II, he earned the rank of Captain as a bomber pilot, flying B-24's out of England and Libya. In 1943, he earned the prestigious Silver Star for his heroic action piloting a low level air raid over the Ploesti oil refineries in Romania, which has been recorded as one of the most spectacular raids in war history. After the war, he returned to Bremerton and then brought Virginia and their two children to Olympia, where he opened his own grocery store on the west side. As a grocer, he worked 10 hours a day, six days a week, rarely enjoying the benefits of a vacation. In spite of the long hours, he still found time to provide a good life for his family, from taking his kids flying and fishing, to buying and fixing up the family's beloved cabin near Steamboat Island. Andy and Virginia were active members of Gloria Dei Lutheran Church, and he spent many years looking after the maintenance and care of the church. He was especially proud of his part in the installation of the new pipe organ. He was also particularly proud of his Norwegian ancestry, and brought many a smile with his Norwegian joke telling. One of his greatest gifts was leaving his family and friends with many pages of stories about his life. Andy is survived by his wife Virginia, daughter Nancy, son James, daughter-in-law Vicki, grandson Adam, granddaughter Kaylen, and many nieces and nephews. He was preceded in death by his parents, and by his brothers Edwin, Monte, and Al, and sisters Esther Vento and Helen Bell. A memorial service will be held at Gloria Dei Lutheran Church, 1515 Harrison Ave NW, Olympia on Saturday, August 2, at 11:00 AM. In lieu of flowers, the family suggests a donation to the Gloria Dei Lutheran Church for the “Facility Renewal Fund,” to continue the spirit of Andy’s hard work and dedication. Arrangements under the direction of Weller Funeral Home, Arlington, WA.
See more See Less

In Memory Of Andrew Wilson Opsata