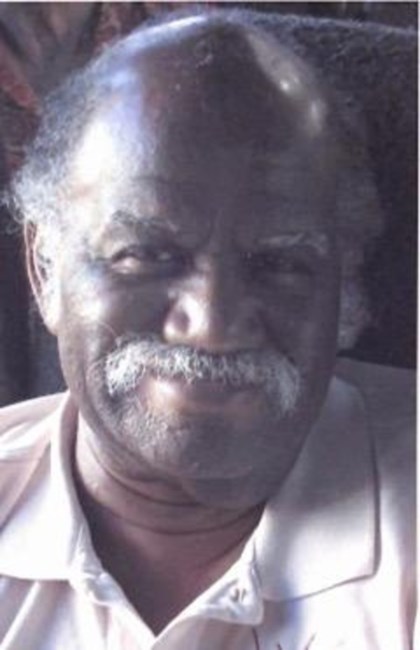 On August 28, 2021 Arbury Jack Guillebeaux took his "plunge into the sea of light in the world of mysteries"*. He was a singular and stalwart soul dedicated to service. He never said "no" when asked for help by individuals or communities, corporations or institutions. Jack believed wholeheartedly that once individuals and communities relied on God and envisioned the positive changes they wanted to see- anything was possible. His humble, wise, intuitive, funny, grounded and kind countenance had a profound impact on everyone he met. He was well-loved and will be sorely missed. Arbury Jack Guillebeaux was born in Asheville, North Carolina to Jack Bunion Guillebeaux and Lois Guillebeaux. His mother called him Arbury, but most of his family and friends have since known and loved him as Jack. He and his brother John grew up on Haid Street in the East End neighborhood in Asheville. Music moved him throughout his life, starting with playing trumpet in the high school band, and later through playing keyboards and listening to an eclectic array of music. In his early days Jack experienced a series of hip replacements that inured him to chronic pain. The strength, endurance and determination that he developed as a result greatly impacted his approach to his life's work. Jack always had a knack for the mechanical and was skilled with building, designing, and renovation. He loved tinkering, especially with his favorite truck. Those skills came to the fore in his early work in watch repair and jewelry making. But when he first experienced group work in the 1960's, he knew immediately that he wanted to be a trainer and community organizer. In 1963 Jack embraced the Bahá'í Faith and served in many capacities for the remainder of his life. In that same year he met the young woman he instantly knew would be his wife, and on July 29,1965, Jack and Farzaneh (Fafar) Rabbani (of the illustrious Samandari family) were married. Due to the conditions of the time interracial couples could not be legally married in North Carolina, so they traveled north for the blessing of getting married at the Bahá'í House of Worship in Wilmette, Illinois. Their life together has been one of teaching and service. Their union of African American and Persian cultures afforded the experience for others of a united West and East for their 56 years together. The Guillebeaux family grew through their daughters Audrey and Minou and their son Hawmi. As a father, Jack constantly challenged his children to pursue work they were passionate about, he modeled and encouraged the use of process thinking and was genuinely invested and proud of their successes. Before and after he became ill, he remarked how happy he was that all of his kids loved each other and worked well together. Jack and Fafar's beloved grandchildren are Joshua Ali Rysiew (Minou and Rob Rysiew) and Louis McKinnley Corder (Audrey and Leon Corder). Jack and Fafar have facilitated and presented at many Bahá'í conferences, schools and community events, both together and individually. They went travel teaching together to Haiti, and worked on Bahá'í inspired work in Australia. Jack served for 12 years as an Auxiliary Board Member for Protection, and for a decade on the Regional Bahá'í Council of the Southeastern States. Jack worked for many years at FOCAL (Federation of Child Care Centers in Alabama) in Montgomery Alabama, and while he was there completed his book "More is Caught than Taught". He was a facilitator for groups from Nashville, Tennessee to the UK, through VISIONS inc (Diversity, Equity & Inclusion Recognizing differences. Understanding differences. Utilizing differences) for work with corporations, and through his own company, Connectors. For the last 20 years he had worked with Innisfree Hotels based in Gulf Breeze, Florida, serving as its founding Director of Culture. One of the biggest highlights of his life and Fafar's was their work at the Bahá'í World Centre conducting communication skills workshops for the international volunteer staff in Haifa, Israel. They both believed that all of their professional and Bahá'í experiences prepared them for these trips. Jack was always curious, eager to learn at every stage of his life, including his last days. He had the ability to identify and decipher the essence of any issue. He was profoundly present and when he gave his full attention to someone, it was like being the only person in the room. He had a life changing impact on many of us. He had a sense of humor that was sometimes raucous, and often sly. Jack was the Rummikub King in the family, and hoarded the jokers so that he could win, while goading everyone on through his trash talk. And it was easy for those of us who saw Jack sitting quietly in a corner with his eyes closed at a gathering to think he was sleeping, only to watch him suddenly come alive with an observation that clearly came from his listening closely. Jack was a totally self-made man with an innate nobility of character and not an ounce of pettiness in him. He had a deep sense of dignity, of real compassion and caring for humanity. Jack's special skills and talents leave a lasting tribute to him and a profound legacy for those he touched. We were blessed to have known him. *’Abdu’l-Bahá
See more See Less

In Memory Of Arbury Jack Guillebeaux