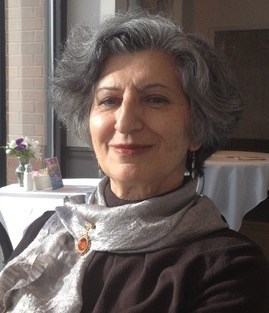 Celebrating the Life of Fafar Guillebeaux (1942 - 2022) On the morning of May 12, 2022, Farzaneh Rabbani Guillebeaux (our beloved Fafar) “hastened from the mortal world of dust to the realm of everlasting glory”* Her life was truly international in scope, and as she was well-loved by so many the news of her death has circled the globe. Her friends and family both grieve the loss of her powerful presence and celebrate her extraordinary life. Fafar was a strong, stalwart, and loving wife to Jack Guillebeaux. She was daughter to Hujjat’u’lláh and Sayyareh Rabbání, sister to Fariborz Rabbání (Farrokh), mother to Audrey Corder (Lee), Minou Rysiew (Robert), and Hawmi Guillebeaux; grandmother to Louis Corder and Joshua Rysiew. She was a teacher to countless individuals and a wise and compassionate friend to many more. Born in Tehran, Iran she was a fifth generation Bahá’í through the lineage of the distinguished Samandari family. Always bright, curious, and deeply intelligent, her parents recognized her capacity, especially when they left Iran to serve as devout Bahá’í pioneers in Turkey. While in Izmir, she attended the American High School where all classes were held in either English or Turkish and she excelled even while learning two new languages. After 5 years in Turkey the family returned to Iran where Fafar finished high school and was awarded a full scholarship to Warren Wilson College in Asheville, North Carolina. In July of 1963 at the age of 20, she left her family and community in Tehran and courageously leapt into the very different world of North Carolina. It was in that very year that Fafar met Jack Guillebeaux in the home of Bill and Bunny Tucker who loved them both into an extended family. Jack proposed to Fafar in February 1965. At that time in Asheville, interracial couples could live together but could not legally marry, so the couple traveled to the Bahá’í Temple in Wilmette, Illinois for their wedding, and returned to Asheville to celebrate their union with friends and family. On their twenty-fifth anniversary in 1990, they hosted another, very different reception in Asheville where the media reported the historical significance of their marriage and celebrated that the state laws had progressively changed. https://bit.ly/3w9fBDU Fafar earned her master’s degree in French Literature in 1967 and taught high school French while living in Asheville. Well educated, always elegant and refined in all things, Fafar was fluent in Farsi, French, Turkish and English. She was also fluent in both the Persian and English cultures and was able to bridge a deeper understanding of each to the other. She had an innate and deep appreciation of beauty and was a consummate and welcoming hostess to all. Fafar and Jack moved to Smyrna near Atlanta, then to Montgomery, Alabama, and finally to Athens, Georgia. Through her own experiences, which she incorporated into all her learning and teaching, Fafar was magnetized by the work of combining spirituality and practicality in relationships and in 1984 earned a master’s degree in Marriage and Family Therapy. The result of this work was a lifetime career as psychotherapist. Her unique ability was grounded in joining the principles of the Bahá’í Faith with tested and effective tools of therapy. So integral to her life was that goal that she served as a gifted therapist to her last day, counseling friends and family naturally and always with her signature authenticity. Her skills and compassion made her well known and appreciated as a speaker, and she traveled widely to lecture, facilitate groups, lead workshops, and give presentations. She conducted national and international training starting in 1988 that was focused primarily on the areas of overcoming racism and sexism, the empowerment of women, inter-racial/intercultural marriage, communication skills, and conflict resolution. https://youtu.be/JyTr7JW9dcI She was a consultant with VISIONS through which she worked with universities, government departments, and companies including Proctor and Gamble and Innisfree Hotels. Fafar presented papers at such esteemed gatherings as the Sino-American Conference in Beijing (titled Holding up Half the Sky), at the Parliament of Religions, and as the keynote speaker at the Annual Women’s History Week dinner in Seneca Falls, New York. Always keenly aware of the particular challenges that women face, Fafar served on the Bahá’í National Committee on Women for many years. She often spoke of two special events in her life as a Bahá’í. One was the honor of meeting Shoghi Effendi, the Guardian of the Bahá’í Faith in 1957 while on pilgrimage with her family to the Bahá’í World Centre. Another was when she and Jack were asked to facilitate training together for the staff at the Bahá’í World Centre, Israel in 1996, 1997 and 1998. She was thrilled to have these opportunities to combine the principles of Bahá’í Faith with her work, which came alive through her innate talents and the power of her own experience. These rich opportunities combined with the depth of her Faith and her own dedication to authenticity, led her to author Spiritual Transformation: Reclaiming our Birthright, a book that represents her life work. https://www.spiritualtransformationbook.com/ In August 2021 Fafar lost her husband of 58 years, and shortly after experienced a recurrence of cancer. Throughout the last few months of her life, she was characteristically honest, clear thinking, and profoundly loving. She dealt with the process of dying as she did with the process of living, with openness, humor, grace, and curiosity. *’Abdu’l-Bahá
See more See Less

In Memory Of Farzaneh Guillebeaux