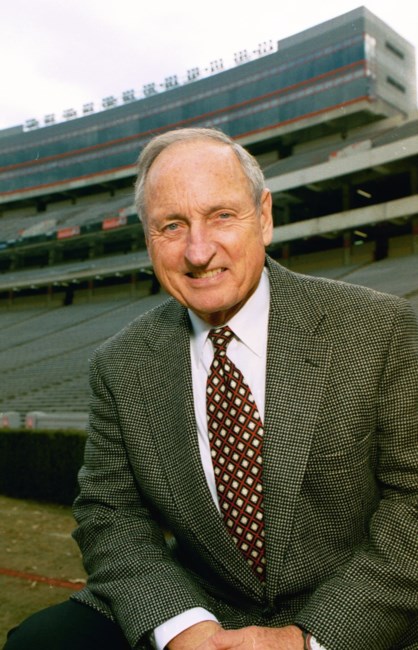 Legendary former University of Georgia football coach and Director of Athletics, Vince Dooley died peacefully at his home on October 28, 2022 at the age of 90. A beloved husband, father, grandfather and great-grandfather, he was surrounded by his wife, Barbara, and their four children at the time of his death. Vincent Joseph Dooley was born into an athletic family in Mobile, Alabama on September 4, 1932. After graduating from McGill High in Mobile, Dooley accepted a football scholarship to Auburn University where he was an all-star football and basketball player. He received his Bachelor’s Degree in Business Management in 1954 and a Master’s degree in History in 1963. After serving in the U. S. Marine Corps, he took a job as an assistant coach at Auburn. Dooley was named head coach of the University of Georgia football team in December, 1963, at the age of 31. For the next 50 years, Coach Dooley had an enduring impact on the University of Georgia, the Southeastern Conference and college athletics across the country. He was a standard bearer for academic excellence, a Hall of Fame football coach, and award-winning Athletics Director. Serving as head football coach from 1963 to 1989, and as Athletics Director from 1979 to 2004, he was a man of great foresight in times of charting the future, a man of stability in times of change, and a man of vision in critical times that have helped shape the path of college athletics. His professional accomplishments and accolades are extensive. Among the highlights are his membership in the College Football Hall of Fame, as well as the Georgia and Alabama Sports Halls of Fame; his record as the winningest football coach in UGA history with 201 victories, six SEC titles and the 1980 National Championship; and as recipient of the 2016 Wooden Citizenship Cup for positive influence on the lives of others. Coach Dooley’s invaluable contributions to the University of Georgia were recognized in 2008 with the dedication of the Vince Dooley Athletic Complex. A statue and garden commemorate his accomplishments along with the naming of all of the south campus athletic facilities in his honor. Coach Dooley was loved and admired by legions of Georgians and UGA fans, who celebrated with him and his family when his legacy was forever preserved upon the naming of Dooley Field at Sanford Stadium in 2019. During his career, Coach Dooley maintained his academic and continuing education interests by auditing classes at the University in such disciplines as history, political science, art history and horticulture. One of his favorite quotes was from Michelangelo who at 87 years of age said, “I’m still learning”. In that spirit, Coach Dooley never stopped learning and after his retirement, pursued his personal interests with the same intensity he coached football. His love of horticulture resulted in the transformation of the grounds of the Dooley home on Milledge Circle and he welcomed groups to tour his garden, sharing his passion and expertise. As a lifelong student of history, he continued his education on the Civil War, and authored a book titled "The Civil War Correspondence of William Gaston Delony, Lieutenant Colonel of Cobb’s Georgia Legion Calvary and Rosa Delony, 1853-1863." He wrote several books about his football career and often appeared at book signings where he greeted fans warmly as he graciously autographed their copies. Coach Dooley gave generously of his time and financial support to many causes including the Heart Fund, Multiple Sclerosis, Juvenile Diabetes, Boy Scouts, homeless advocacy, and the Salvation Army. His philanthropic efforts included 28 years as Chairman of the Georgia Easter Seals Society for which a facility in Atlanta was named in his honor in 1990, and a fund-raising campaign he co-chaired with Barbara to establish Monsignor Donovan Catholic High School which serves Athens and the northeast Georgia area. Coach Dooley was preceded in death by his parents, William Vincent Dooley and Ellen Agnes (Nellie) Stauter Dooley, his sisters Margaret (Dede) Cammak Blankenship, Mary Rita Dooley, Rosezella Dooley Zakrzewski, and his brother William (Bill) Dooley. He is survived by his wife of 62 years, Barbara Meshad Dooley, and their four children: Deanna Dooley Rogers (Destry), Vincent Daniel Dooley (Suzanne), Denise Dooley Mitchell (Jay), and Derek Vincent Dooley (Allison). The Dooleys have eleven grandchildren: Patrick (Lauren), Catherine, and Christopher Cook; Michael (Maggie) and Matthew Dooley; Ty, Joe, and Cal Mitchell; and John Taylor, Peyton and Julianna Dooley, and four great grandchildren: Murphy, Miles, and Lane Cook, and Jack Vincent Dooley. Funeral services were private. Pallbearers were Patrick Cook, Christopher Cook, Michael Dooley, Matthew Dooley, Ty Mitchell, Joe Mitchell, Cal Mitchell, John Taylor Dooley and Peyton Dooley. A public celebration of life will be held Friday, November 25, at 7:30 p.m., at Stegeman Coliseum. Memorial contributions can be made to the following: American Battlefield Trust, 1156 15th Street, NW, Suite 900, Washington, DC 20005; The Catholic Center at the University of Georgia, 1344 S. Lumpkin Street, Athens, GA 30605; Champions Community Foundation, 2850 Old Alabama Road, Johns Creek, GA 30022; Georgia Historical Society Vincent J. Dooley Distinguished Fellows Program, One Baltimore Place NW, Suite G300, Atlanta, GA 30308. Bernstein Funeral Home is in charge of the arrangements.
See more See Less

In Memory Of Vincent Joseph Dooley